Mayor Bill de Blasio is proposing (A10427A) to scrap the SHSAT test which is the sole criteria for admitting students into New York City’s top high schools. What he is trying to fix is not a problem in our education system but a political problem that makes him look bad. Even though black and Latino students make up two-thirds of all public school students, only 9 percent of them were admitted to these elite schools. If you were to visit one of these schools, the problem is painfully visible. It’s an embarrassing problem for de Blasio. His political problem would certainly be fixed if we were to see a lot more blacks and Latinos at these schools. The symptom would be gone, and it would appear as though the problem is solved, but let’s not be fooled by his self-serving trick. 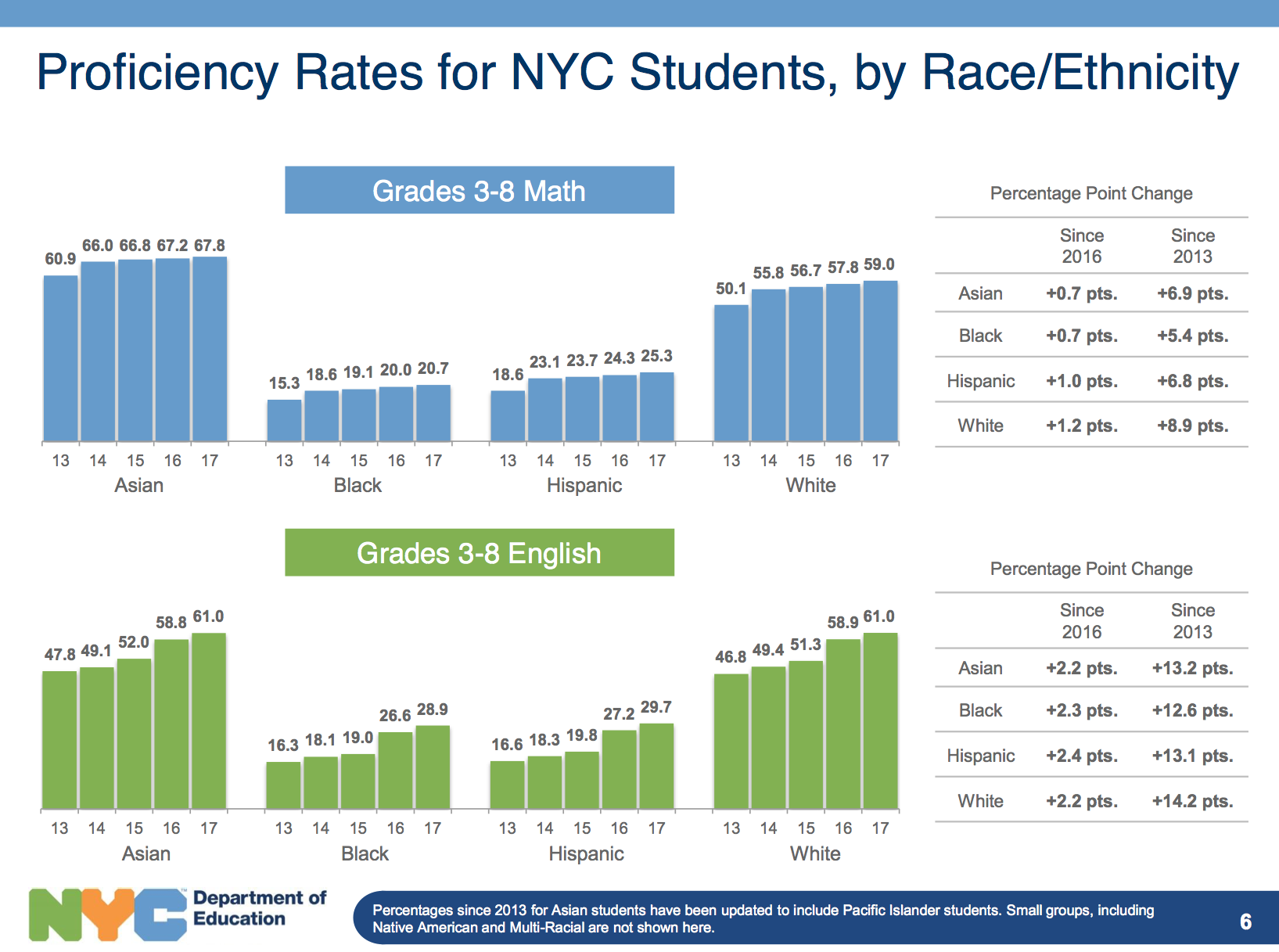 Take a look at the chart above. This is an official slide of NYC Department of Education showing the proficiency rates of NYC students by race. Note that these are for grades 3 to 8, that is, before high school. The proficiency rates of black and Hispanics are less than half of Asians and whites. Clearly, SHSAT isn’t the problem. If we were to take the top 10% of these charts, it is obvious that it would consist mostly of Asians and whites. (More details on this here.)

So, what is the solution? De Blasio is essentially suggesting that we automatically give black and Hispanic students more points so that these columns line up. Voila! Problem solved. Why bother going through a long, painful, and expensive process of improving the quality of education in primary and middle schools when we can simply tweak some numbers?

He is flipping the cause and effect. The real problem is that our primary and middle schools are failing blacks and Latinos. Instead of fixing this problem, he wants to whitewash the ugly symptom.

Let’s get this straight. High school isn’t where the problem is. High school is where we see the problem for the first time. In primary schools, we can still have significant disparities in proficiency within a classroom without disrupting or dragging down the whole class. This allows these schools to look diverse without noticing the racial disparity. But as we go up in grade, classroom disparities become increasingly difficult to manage. If the gap within a classroom is too wide, the students towards the top would be bored and those at the bottom would be lost. So, we have to select students narrowly based on their proficiency levels at high school and college levels. And, we should not be surprised to see top schools filled with Asian and white students. Just try slicing that DOE chart horizontally from the top as if you are eating a pint of ice cream from the top. What would you expect to see in your first couple of scoops?

On the other hand, what exactly would de Blasio’s plan achieve? Even if the specialized high schools look nicely diverse, what would that do for primary and middle schools? What would it do to address the real problem?

Last year, I had an opportunity to tour Stuyvesant High School privately during the day and see how students behave in class and during recess. What goes on there is pretty insane. As soon as the bell rings, the students run out of their classrooms to the library so that they can secure desks there for their lunch break, not to hang out with friends but to study. Those who could not secure any desks would sit on the floor of the hallways to study. You see them everywhere. They are all studying.

I would not want to go to a school like that unless I’m at least around the 75 percentile. Just imagine how depressing it would be to study all day long and still be at the bottom. It requires a specific kind of personality to thrive and survive in this type of environment, and if you have that type of personality, you would have gotten into one of the SHSAT schools without any help from de Blasio. If you couldn’t get into it, it’s a good thing that you are not going there. Pushing unprepared students to these environments would not be beneficial for them; it would only save de Blasio’s face.

As an adult, if you were considering taking a class in, say, computer programming for the first time, do you think that you would learn more if you took the advanced class? Chances are, you would learn absolutely nothing. If you took the intermediate class, you might learn a little. To learn anything as adults, it is essential that we learn at the appropriate level.

SHSAT is an objective criterion. I agree that a single test cannot evaluate a whole person but it is still better than subjective criteria in terms of fairness. Take a look at this chart below: 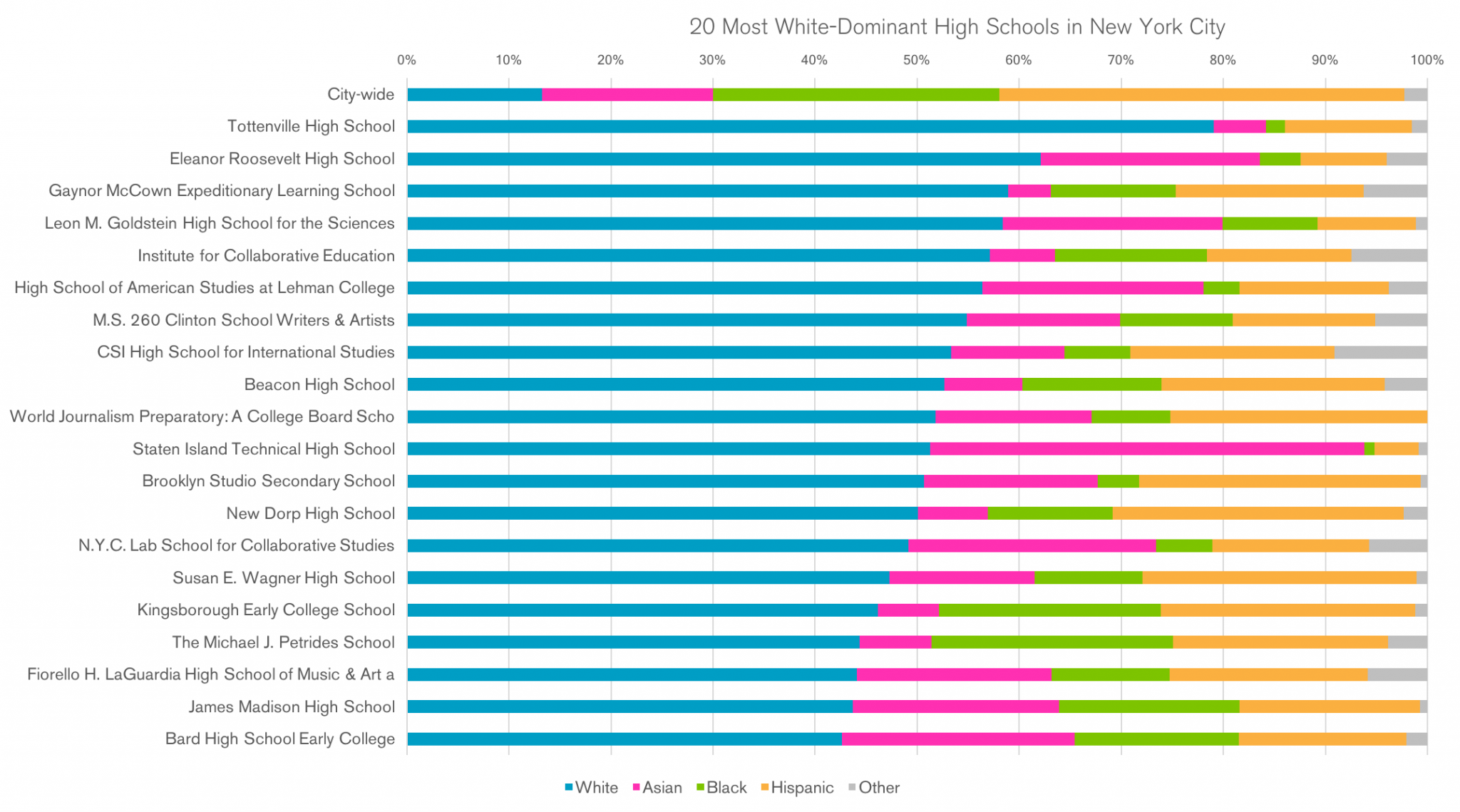 These are 20 of the most white-dominant high schools in New York City. The bar at the top represents the racial makeup of all public school students. You see that white and Asian students have about the same proportion. If we were to select students based on DOE’s proficiency, every school should have an equal proportion of Asian and white students, but some of these schools have a tiny percentage of Asians.

The reason for some is understandable. For instance, the schools in Staten Island would be white-dominant because the island itself is white-dominant and it’s not easy to commute from there. But how do we account for schools like Beacon and ICE whose Asian proportion is tiny compared to that of white? What they both have in common is that they put a lot of weight on interviews. And, if the school is already white-dominant, and if the selection criteria are subjective, they will naturally select people they feel close to.

We call this “institutional racism” when we criticize the disproportionate percentage of white people in corporations and government institutions, particularly at the top. It’s as if white people designed the test to be easier for white students. At least the SHSAT tests are not designed by Asians even though SHSAT schools are predominantly Asian. Clearly, Asians are not doing anything unfair.

If you have ever wondered why Asian Americans love objective criteria so much, this is partly why: Because white people cannot abuse their power if the criteria are objective.

If de Blasio wants to fight unfairness, he should be going after these schools who use subjective criteria to favor white students. Or, at least investigate how they could end up with such a huge proportion of white students without getting an equal proportion of Asians. And, if their criteria are already subjective, what is their excuse for not having two-thirds black and Hispanic? Why is he attacking Asian-dominant elite schools when white-dominant elite schools are clearly doing something unfair?

Granted, these are not easy problems to solve, but what he is proposing is a grossly simplistic solution that ignores the real problem. Let’s not let him get away with doing what is easiest to save his face.