The Woman in the Dunes

There are many books and films about enlightenment but The Woman in the Dunes written by Kōbō Abe and directed by Hiroshi Teshigahara is a rare example which is capable of actually triggering an enlightenment in us as the audience. Before analyzing the psychological mechanics of the film, I’ll provide a brief summery of the plot. 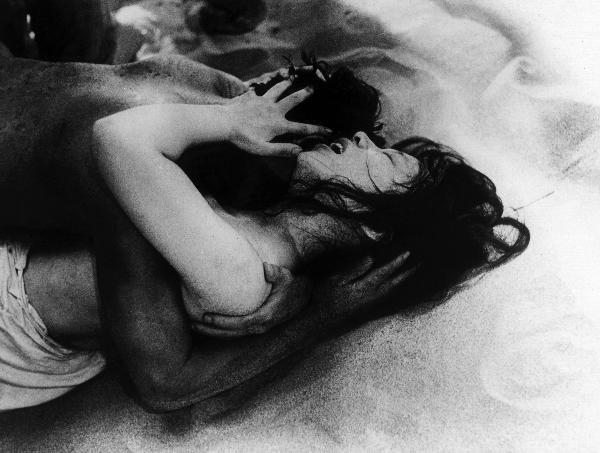 The protagonist, Junpei Niki, is wandering in the dunes looking for insects. He is a school teacher with a passion for finding and collecting rare insects. A local old man approaches him and asks him what he is doing. The old man is satisfied with his answer that he is a school teacher. He then offers him to spend the night in his village as the last bus out of town has already departed. Junpei is excited about spending the night as he wishes to learn more about the dunes from the locals.

The house he is to stay at is at the bottom of a large pit of sand and he climbs down into the pit through a rope ladder. He is welcomed by a woman about his own age (30s). The house has no electricity or running water, and it turns out that she is the only resident there. She tells him that her husband and daughter were killed by a sand storm. After fixing him a dinner, she goes outside and starts shoveling sand into buckets which are then lifted to the surface by several village men. Junpei learns that she needs to do this every night, all night long, in order to prevent the house from getting buried. He finds this absurd and asks her whether she is shoveling to survive or surviving to shovel, and what the point of all this is.

The next morning, he tries to leave while the woman is sleeping, but he realizes that the rope ladder is gone. The pit is a few times deeper than the height of the house, and it works like an antlion sand trap. It eventually dawns on him that there is no way out. He confronts the woman and realizes that she is an accomplice in holding him hostage. She tells him that her life is too hard to manage without a man.

He tries to outsmart the villagers and attempts to escape but all of his clever schemes fail. In one attempt, he manages to get out of the pit but he gets trapped in a quicksand as he tries to run away from the chasing villagers. He then has to ask them to save his life, and they pulls him out. He is sent back to the pit with the woman.

Eventually he gives up all attempts to escape except for one. He builds a trap to catch a crow so that he can attach a message. The trap was built with a wooden barrel buried in sand, covered on top with a sheet of newspaper. One day, he discovers that the bottom of the barrel was filled with water. He eventually figures out that capillary action is pulling water up to the surface and the paper on top was capturing the evaporating water and dripping back into the barrel. He becomes fascinated and obsessed with perfecting this technique and methodically records the results of his experiments in his notebook. His interest in insects fades and he throws his samples into fire in order to use the box for a different purpose.

The woman becomes pregnant and the complication requires her to be sent to a hospital. The villagers came down to the pit to lift her up. At that moment, Junpei considers the idea of sharing with the village elder his knowledge about how to collect water from the sand, but decides to wait for another time. They left the rope ladder behind them. Junpei climbed out of the pit and walked to the beach, then decided to go back into the pit.

The film ends with an official government document indicating that he is now officially considered missing after 7 years.

Contrary to what some critics claim, the substance of this film is not particularly Japanese, although the setting is. The story is meant to be surreal, meaning it steps outside of the expected cultural norms. Furthermore, it is a story of a man who is literally pushed into an entirely foreign culture/environment. His native culture is Japanese but the culture that he is forced to confront is utterly foreign to this ordinary Japanese man. In this sense, what the audience (primarily Japanese) experiences is quite foreign, not particularly Japanese. The knowledge of Japanese culture would not help you understand this film any better.

At the beginning of the film, we feel that the lives of these sand people are absurd. As the protagonist says, we can’t help but ask why they bother living the way they do. They spend most of their lives digging sand so that they would not get buried. Why not move somewhere else? But ultimately all of our lives can appear absurd to an outsider. For instance, why bother trying to make it in New York City, living in tiny apartments with astronomical living expenses, with billionaire neighbors constantly making us feel inferior, when we could live elsewhere much cheaper and more comfortably? Our bank accounts drain faster than we can put money in. The competition is fierce, and we barely have a moment to breathe because of the fast pace. What are we trying to prove? Are we hustling to survive or surviving to hustle? Watching the documentary film Roger and Me, we ask the same question about the people living in Detroit. Why don’t these people move somewhere else? What’s the point of staying there if life is so miserable, and there is no hope of getting better?

The Woman in the Dunes answers these questions: It is precisely because our lives are traps that they can give meaning to our existence. Living in New York City is not an easy feat to achieve, but for one reason or another, we are drawn to living here. We learn the skills necessary to survive here, and those skills then become valuable for others who also live here. If nobody else wanted to survive here, or if surviving was easy here, our skills would not have much meaning. It’s a trap because it has to be hard, and this hardship ultimately has no purpose. We generate meaning out of pursuing hardship for its own sake. That is, pick anything hard to do, and find others who are willing to endure that hardship, you will create a meaning in life.

The protagonist of the film originally picked the world of entomology. His dream was to find an insect that nobody else has found, so that he can leave his name in the history of entomology. I know practically nothing about entomology, so to me personally, it sounds as meaningless as knowing a lot about the nature of sand. And, I don’t know anyone famous in that field, although I’m sure there are many. But for those who are immersed in the field, there is nothing more important and meaningful. The meaning of their own existence is defined by it.

Our implicit assumption is that our own worlds have objective/universal significance which is not dependent on how other people view it. That is, we assume or believe that the significance of the world we choose to live in is absolute, not relative. This is why we are dumbfounded when we see others living in different worlds who seem to struggle for no good reason. Our immediate question is: Why don’t they just leave? That is, we implicitly ask why they don’t come to our own world where the true meaning is. The Woman in the Dunes demonstrates that there is no such transcendent world. Our choices are ultimately arbitrary; one is no superior to the others.

After all, what is the difference between the situation we are born into and where Junpei was forced into? Even today, millions of people are born into families who cannot feed themselves, with deadly diseases all around them or dodging bullets and bombs. These babies have no choice. They are trapped just like Junpei is, and they have to figure our how to survive in their worlds, and their survival skills eventually give meaning to their existence. The difference between these babies and Junpei is that he already had another life, another world where his existence had meaning. Leaving that world feels like death, and he fought tooth and nail to go back to it. Should he then wonder why these villagers wouldn’t want to leave the dunes? It is the hardship of the dunes that gives meaning to their existence just as the hardship of living in New York City gives meaning to the lives of New Yorkers.

A more interesting thought experiment might be to imagine traveling back in time to the days of Jesus Christ and getting stuck there. What would you do? Suppose you are a highly talented computer programmer, well known in your own field. In Bethlehem of Judaea in those days, what would you do? Whatever knowledge and skills you acquired would be useless. You may have a degree from MIT but who is going to understand or care? If you want to survive and have meaning for your own existence, you would need to entirely leave behind the life you had in the future. That is, you need to die first, before you can start a new one. When Junpei threw the insect samples into the fire, he was symbolically ending his previous life. He then gave meaning to his own existence by inventing the way to collect water from the sand. Ironically who would care about such a technique? Only the villagers would. He successfully completed his existential shift at that moment. His insights and wisdom of sand now define who he is.

The writer Kōbō Abe grew up in Shenyang China, or Mukden Manchuria, and moved to Japan when he was 17. I would imagine that he must have experienced a similar existential shift. Zen monks are encouraged to go through these existential shifts as a practice in non-attachment. There is no use thinking about our lives as a trap no matter how miserable we may feel from it. The moment we escape our trap, our existence loses its meaning.

At the beginning of the film, we are sympathetic to the protagonist, and can feel his anger towards the villagers. Those of us who have watched one too many Hollywood movies may even fantasize about our hero somehow climbing up the sand pit and shooting them all with a machine gun. However, once we understand the logic of their existence, we can even sympathize with their desire to trap a man and force him to give up his old life, and to start a new one in their world. The moment we can extend our sympathy towards them, we have an enlightenment of sort. We are able, not only to understand the point of view of the characters in the film, but also the fundamental meaninglessness of our own lives, and how meaning of our lives is dependent on others around us. Whatever world we happen to live in is ultimately arbitrary and no better than any other worlds, and how limited we are in comprehending the values of those who live in different worlds.