Goblets of Fire: Drinking in the Harry Potter Experience

Admittedly I am on the sidelines of the Harry Potter explosion. My exposure has been limited to a mere chapter: I was pleased that such a challenging book was the rage for kids. The movies I have yet to experience. Yet, in this strange world, I had a perfect opportunity to observe the stars firsthand at The Goblet of Fire New York Premier. What I saw struck me, and I’d like to share.

The three teenage stars of the movies — Rupert Grint, Daniel Radcliffe, and Emma Watson — reveal the range of our species, behaviorally, and psychologically. At the premier, on the red carpet, was an event that presented all three with the same set of circumstances. Differences that were readily apparent then can be deemed to be intrinsic and not external. What drove me to write this was the adventitious spotting of a photo, that, much like a Wright Morris photo or a W. G. Sebald image, seems to perfectly encapsulate or compliment my observations. The photo of Rupert, Daniel and Emma is at the end. Decide for yourself.

For those not in the business, let me briefly run down a movie premier. The New York Premier of The Goblet of Fire was at the Ziegfield Theater, on 54th Street. A literal red carpet stretched 200 feet down the sidewalk, the press jammed on one side of it. The stars walk down for photo ops and sound bites. The headlining stars come last. The Goblet of Fire was the largest press corps I’ve seen at a premier. Across the street, on the sidewalk, was a sight new to me. A phalanx of at least 5000 fans, female, aged 8-18, many moms in tow, crowded against the police barricades, waving signs, screaming, doing the wave, waiting for their stars Corralled and controlled, the crowd nevertheless swelled enough to force the closing of 54th Street.

Rupert was the first of our three down the red carpet. He was preceded by all the adults of course: the producer, the director, the adult actors, but not JK Rowling. The kids, the stars, come last. Rupert was greeted out of his limo with a roar heard at college football stadiums. He was wearing what could have been yesterday’s clothes, or at least what was first to be grabbed out of the closet. Nondescript to say the least. His hair fell freely where it wanted to go. As Rupert neared my station at the first few video crews, he crossed a gap that allowed the crowd to get another glimpse of him. The chant rose fast and furious “Rupert, Rupert, Rupert.” Rupert turned to the crowd then turned to us with a shrug, with bewildered dismay, with a touch of chagrin. Why would anyone chant for him? He was just another kid who would rather be in his basement with his buddies and a root beer having fun. What was the fuss? Not that he doesn’t want attention, but he wants to earn it. Rupert is happy to meet you, but it would have to be as equals. As a person.

Daniel, in turn, strutted right up to the press. To the chants, at least as loud as Rupert’s, he responded happily: waving, keening to listen, playing it as well he could from the distance. A touch of the wary, yes, but he knew by this point. His suit fit perfectly, styled for attention in royal purple. He had been made up, too heavily, though while it looked odd to the eye it was intended to render perfect the results of the camera. Where Rupert dangled, engaged, in the space in front and all around him, Daniel seemed to be spiked to the ground. Rotating on his pivot point, playing along, even guessing at what answer you wanted to hear when the question was muddled. Daniel was playing his role, the gracious, accommodating star. The role he sought out and desired. The suit, the make-up, the answers, all for the audience. Daniel was here to work for you, knowing full well both that you and he are working for the man. Daniel would be crushed if the audience dismissed him. Daniel puts the audience first. Rupert, I think, reserves the final judgment for himself. Not to say one is good or bad: and perhaps if you’ve seen the films you can answer this question: Does Daniel use this need for an audience to drive him to a better performance, a performance one might otherwise stifle out of self-consciousness?

Emma came and went without me knowing who she was. There were no chants for Emma from the female audience. Our crew was on the lookout for the plump girl in the publicity photos. The woman that came to us, I mistook for an older actress. Provocatively, Emma’s dress was all exposure, a frame for her breasts. Spatially, Emma was pointed in the direction of her breasts. You looked in her eyes, you couldn’t help but look at her breasts, and then you returned to her eyes smiling back at you. If my 15 year old brought that amount of simmering sexuality I would be out of my mind. Emma had an aura around her, like I have only seen on Winona Ryder. She was both wielding and learning her powers. Eagerly she revealed her beauty. I imagine she had one of those mirror moments where you are looking, impartially, and are so happy with what you see. Was she being a role model? A siren? Going from a girl to a woman (that happens so much earlier than boy to man)? Emma was here to see how people reacted. If Rupert was there begrudgingly, and Daniel was working with you, Emma was already working the room. Transfixed, I didn’t hear a word she said. The statement was a physical statement and inescapable.

Naturally, some similarities I have glossed over. All three are intelligent, mature for their age, seemingly grounded, very respectful. They answered the questions with the grace of professionals, which they are. Being British perhaps highlights their politeness, and one notices a continental sense of being more aesthetically aware than their American counterparts, those underwear waving throngs across the street. Oddly enough, the three were at once aristocratic and egalitarian — one hopes the new legacy of Europe. Are they special kids? Perhaps somewhat, but as the example of Miles Davis shows — he was a kid who could not play a trumpet but Bird and Diz anointed him the Chosen One — 90 percent of learning is doing.

Back to the differences now. Is it enough to say that these three are quite different in the way they have reacted to their power at this event? Rupert the teenager had no interest in the extensions of his powers, Daniel perhaps would say an audience is a necessity to a performer. He merely is a performer now graced with an audience. Emma meanwhile has discovered another power — a social power, and is happy to explore it.

It the risk of cutting this short, those are my observations. Was it important that even though Emma came last, Daniel was still answering questions when she and everyone else was long gone? These and other observations could all be stated. But now, here is the photo that caused me to take notice. One clearly sees the sadness of Rupert’s eyes, the unsettled nature of Daniel’s mouth, and the challenge of Emma. The body language of all three. And yes, Daniel is on a half apple. 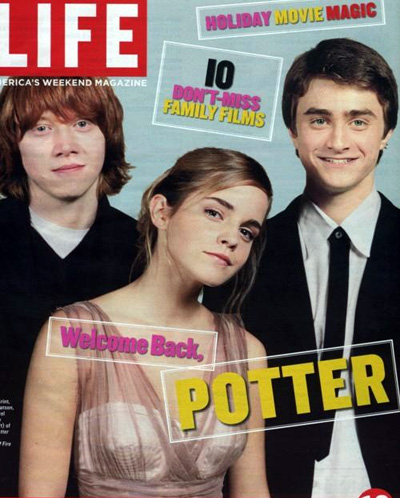