The Battle of Bugaboo vs. Micralite

When you have a child, you are supposed become wiser and more mature. Not true. You will be surprised by how superficial you can be. Perhaps a child enhances everything good and bad in you, like what MSG does to food. If you have recently had a baby, you would know what Bugaboo is. It is an $800 stroller that is all the rage even among parents who are not so rich. If you are a superficial parent like me, and if you live in New York City, you would notice them everywhere. There is always at least one Bugaboo within your sight. Naturally, I considered buying one myself, but I didn’t want to be just another superficial parent; I wanted to go further. I wanted to be super-superficial. So, I imported a stroller from England called Micralite.

Micralite is actually not as expensive as Bugaboo, but you are not supposed to know that. What matters is perception. It looks cooler than Bugaboo especially since most people in the US have never seen it before. If you own a Bugaboo, you’ve done a thorough research of what else is available. After all, you would feel stupid for paying $800 if there were something else just as good or better for less. You know the brand, model name, and price of every stroller on the market. So, if you come across a stroller that looks cool and if you don’t know what it is, you feel threatened. You need to find out what it is and how much it is. That’s what happens when you drive your Micralite. The Bugaboo people stare at it, do a double take, or turn around as if they are checking out a girl’s ass. As my friend described, Micralite is equivalent to Aston Martin, if Bugaboo is Porsche. 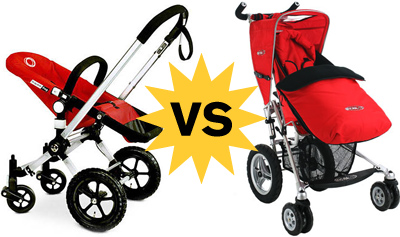 In terms of the quality of hardware and craftsmanship, both are equally impressive. I have to admit that, in terms of versatility, Bugaboo is better. You can configure it in a variety of ways depending on the age of your baby and the situation you are in. However, Micralite allows you to fold it quickly and efficiently, making it easy for you to carry it up and down the stairs, which is a handy feature in the city. Many Bugaboo owners end up buying another lighter stroller, especially if they live in a walk-up apartment building.

My interest in stroller started when my wife described what happened at the class she was taking for new mothers. One day, one mother who only had a universal car-seat carrier asked the class for a recommendation on a stroller. The teacher asked who in the class were happy with their strollers, and all the Bugaboo mothers raised their hands proudly, and no one else had the balls to raise theirs.

When I heard this story, I became determined to outdo them. There must be another stroller somewhere that would make them look like suckers, but my search was not fruitful. Nothing else looked as good as Bugaboo. There is in fact another stroller even more expensive than Bugaboo. It’s called Stokke Xplory. However, the design of it is too strange and ostentatious that it looks silly. It’s sort of like Segway. No wonder all the superficial parents resorted to buying Bugaboos.

Intentionally or unintentionally, Bugaboo played into the psychology of new parents perfectly. New parents are unavoidably self-conscious. They want to feel that they are doing the best possible job for their babies. If some product is clearly better than others, it strikes a chord with new parents in three ways. 1. It fulfills their desire to do the best for their baby. 2. It gives them a legitimate reason to be materialistic. 3. It allows them to show off their social status without feeling guilty. The pretense is that they are doing it for the baby.

Sadly, it was looking like I wasn’t going to enjoy any of those wonderfully superficial feelings. I hated the idea of buying a Bugaboo after spending so much time thinking about defeating the Bugaboo owners. My wife and I eventually gave up and decided to buy an ordinary Maclaren. I felt defeated. Then the miracle happened. Some superficial god must have been listening to me. Just as my wife arrived at Buy Buy Baby to buy a Maclaren, a British couple strolled into the store with a shinning silver stroller with big rear wheels and streamlined design that reminded one of Formular 1 cars. I wasn’t there at the time, but my wife and her friend gravitated toward it, and asked them what kind of stroller it was. They told her that it was a British stroller called Micralite, and that they are not available here, but are very common in England. She immediately called me and told me what she had witnessed. We decided to hold off on buying a Maclaren, and did further research into Micralite.

It was perfect. We live in a walk-up building, so Bugaboo would have been too much to deal with. With the way Micralite folds, we would be able to easily carry it up and down the stairs. But, that was just an explanation I gave myself to legitimize the purchase of it; in the end it was all about the looks. It looks cool. The elegant intersecting lines that it creates as it unfolds, and its origami-like geometry of the bright red fabric, are aesthetically superior to Bugaboo. It was sure to threaten Bugaboo owners.

Even though shipping from England was expensive, it still was cheaper than Bugaboo in the end. When it arrived, my wife and I felt as though it was Christmas. I was so satisfied with how it looked that I didn’t care what disadvantages it had. In fact, as soon as someone used the word “but”, I turned my brain off so it sounded like a garble. It is very much equivalent to how Bugaboo owners carry the big, awkward thing up and down the stairs with a smile on their faces. When you go through a lot of trouble getting something, you can’t look at it objectively. Your desire to believe its superiority overrides everything else.

I feel I achieved a higher level of superficiality than anyone else has with a stroller. When I push it on the street, it almost doesn’t matter if there is a baby in it or not. In fact, my baby doesn’t give a crap about what she is sitting in. It’s all about me and the stroller, and about the rush I feel when I walk by Bugaboo owners. I act nonchalantly, like I didn’t even notice them, and say silently in my head, “Suckers!” Now, I wonder what comes next in my parenthood.