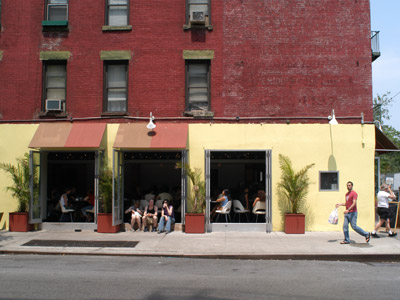 Sometimes some restaurants go out of business utterly unexpectedly. One day, it’s bustling, people waiting in line to get in. Next day, it’s gone, like Enron. Leshko’s at the corner of Avenue A and 7th Street had every sign of a happening place. They took the name from the cheap Polish diner that used to be at the same location (see below for the original Leshko’s), and turned it into a lively place usually packed with people day and night. I used to go there frequently before it became too popular, but when I noticed that it was gone, I hadn’t been there in probably six months. I remember one night getting rejected by the host because we didn’t have a reservation.

I wonder what happened. My guess is that the owner couldn’t figure out a way to turn a profit despite its popularity. The simple equation of income minus expense didn’t leave them with much. Again, it’s like the Dotcom era. Popularity does not necessarily mean profit.