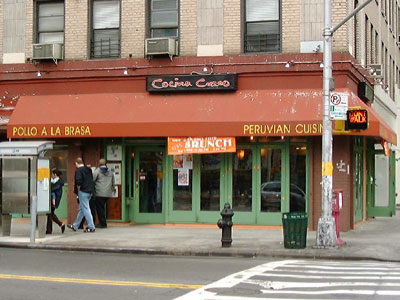 Many restaurants flourish for about 6 months and slowly die over the course of the following year or two. What seems to happen is that an executive chef comes up with a menu, trains the staff, supervises them for a few months, and then leaves. If the owner of the restaurant is not passionate enough about the food, he/she would try to reduce cost while overlooking the compromise made in quality. From there on is a downward spiral. Since no one is there to give a damn, the quality deteriorates slowly but surely. After a year or so, the original staff that was trained by the chef is gone. The recipes get passed down from one generation of staff to the next; they eventually resemble nothing like the original.

This is what seems to have happened with Cocina Cuzeo, the Peruvian restaurant that was on Avenue A and 4th Street. I believe it was there for about 4 years. When it first opened, the food was phenomenal. I could so clearly taste the freshness of the ingredients in their ceviche. Everything they served was exotic without tasting too foreign. I loved their desserts too, especially the blue corn gelatin. The staff was eager to please, friendly, and attentive. Every time I told them how great their food was, they would smile happily and proudly. Not surprisingly after a month or so, they were written up in some magazine and their business exploded. It became difficult to get a table for dinner, so my friends and I would go there for brunch.

But after about 6 months of popularity, I noticed every time I went, there was visible degradation in the quality of their food. It became so questionable that I began to worry about getting sick from their ceviche. That is when I stopped going there altogether. I felt sad and disappointed.

I have a feeling that the owner got a little too greedy. He wanted to squeeze more profit out of the same cost. It was no longer driven by passion but by money. I imagine the kitchen staff who was told to make the same dishes every day like an automated machine didn’t care about what they were making. In other words, they were alienated. This is a good example of Marx’s concept of alienation being just as relevant for capitalism today as it was for the propaganda of communism. Alienation can be damaging to capitalism just as, in the opposite scenario, communism can promote alienation. Especially in creative businesses like restaurants, alienation is your enemy as a business owner. You have to prevent it at all cost. A cook handcrafts every plate you serve. Whether he cares about what he is making makes a world of difference in the quality of your product. Love is the most important ingredient in any recipe. Without it, you might as well go into some other business.