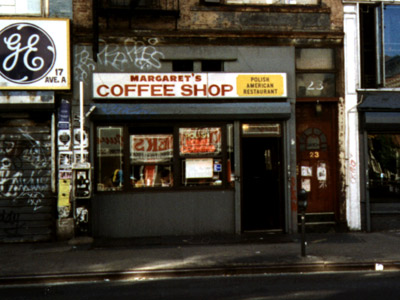 I now forgot which came first, Margaret’s or Alice’s, but both were practically identical. (I believe it was Margaret’s and then Alice’s.) The only difference was the sign outside; they just changed the name. Margaret’s Coffee Shop was a Polish diner, typical of the East Village at the time (above picture taken in 1995). Now there are only a few of them left. What happened was that Veselka, the most famous Ukrainian restaurant in the East Village, upped the ante by putting a lot of money and effort into renovating the place, thus attracting higher-end customers. Several other Polish/Ukrainian restaurants in the neighborhood followed the suit. Margaret’s was one of the last low-end Polish diners. They closed only a few months ago.

I’ve always felt bad for waiters who worked for one of these places. Especially during breakfast hours, every check was around 2 to 3 dollars. If you leave an 18% tip, that is about 50 cents. You still have to do pretty much the same amount of work as if you served dinner or lunch. How much can you make in a shift with 50 cents a table? Serving 20 tables would be 10 bucks.

Both Margaret and Alice were old ladies who worked there almost every day. They had young girls as waitresses, a young man as a grill cook, and middle-aged ladies in the kitchen. When Alice took over the management, she required all her waitresses to wear a uniform that looked somewhat like nightgown. It was her attempt at visually improving the place, but it did not last too long. First of all, the uniform was too loose for the job that required swift movements. Secondly they had problems with what to wear underneath and most of them ended up wearing nothing but bras that were practically hanging out when they bent over to serve their customers, which might have increase the number of male clientele.

Now that the East Village is as popular as the West Village, low-end diners can’t afford the rent. I miss these low-end Polish diners.