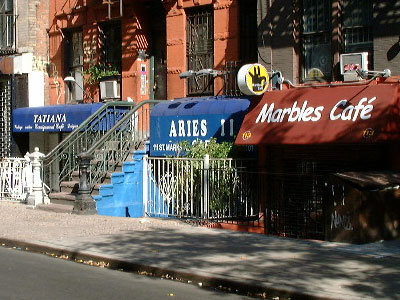 Aries II was a mysterious cafe. It was always empty. It came and went very quickly. It was owned by an Eastern European guy (Croatian, I think) who hardly spoke any English. The place had several couches, coffee-tables, and a gigantic projection TV. It looked like a basement hangout of a suburban home. I felt like I was invading someone’s living room. There were always a few friends of the owner hanging out there watching TV, talking in some sort of Eastern European language. Though it was awkward, the place fascinated me. There was something genuinely foreign about it.

Oddly the owner had no interest in doing business. Every time my friends and I went there, the only thing he had to offer was cheese cake. Even the drink menu was severely limited to a few different kinds of sodas, which were stored in a standard refrigerator for home use. So, twice in a row, we all had a can of ginger ale and a piece of cheese cake.

We figured that the main function of the place was either a front for some shady business or home for the owner. The fact that it went out of business tells me that the latter was not the case. There is also a slim possibility that he was just an incredibly bad businessman.

What also puzzled me was that the name of the cafe was called “Aries II”, which leads me to believe that there is “Aries I” somewhere, but this is hard to imagine. How could this owner be successful enough with “Aries I” to open another branch?

I actually miss this place. The casualness of the place was truly unique. I wish the commercial rent in New York was cheap enough for people to open more businesses like Aries II.