Language is a grid system that you lay over the reality in order to understand and communicate with others effectively. That is, it is like laying a grid over a piece of abstract painting in order to make the discussion of it easier. An odd phenomenon that happens with this is that sooner or later, the grid system takes over the reality. The painting itself becomes secondary to the grid. It takes on a life of its own. This is a “reversal of the over-heated medium” phenomenon where the effect is taken as the cause.

As an example, let’s imagine some art critics wanting to make some serious analyses of a painting by Gerhard Richter. In order to communicate efficiently, they draw a grid over the painting, and they start their discussions using the grid coordinates as follows: 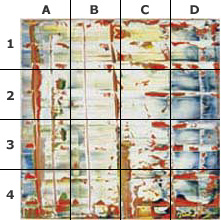 “Take a look at A1. This is where this painting all begins. It implies the entire painting. It not only determines the movement downwards but also dictates the horizontal movement.”

“I’m not sure if I agree. The relationship between A1 and D4 is incidental. There is nothing in D4 that’s implied in A1.”

A few months later in some publication:

“Mr. Greenberger’s A1 theory is obviously flawed. The implication of the entire painting that he sees in the area A1 exists only in his mind...”

“Often a single sentence can imply the entire novel. In this Richter’s piece, A1 is what does it...”

“Greenberger’s A1-ism is quite problematic from artists’ point of view. If A1 can represent the rest of the painting, then what is the point of painting the rest of it?”

“Those so-called ‘A1-ist’ painters find an area that they feel implies the entire painting and crop out the rest of the painting...”

“Post-A1-ism painters are now discarding the area that they feel to be the essence of the painting...”

Meanwhile, there is a whole different discourse going on on the other side of the planet which is based on a triangular grid system, rather than a square one: 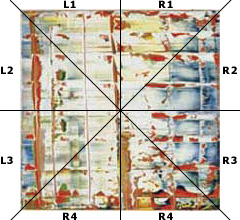 “R2 is in direct contrast to L3 as L1 is to R4. What makes a great abstract painting is astrology-like relationships of forms and colors to one another through its center...”

As the discussion goes on, eventually one forgets that the grid was initially set arbitrarily for the sake of convenience. Especially if the discussion becomes loaded with emotions, the grid becomes a reality of its own. This also goes on in the world of science, where one scientist establishes a grid system and others join in on the grid analysis, only to be discarded by another grid system later that can better explain newly discovered phenomena.

Language is hypnotic. Most of us view and interpret the world through the filter of language, unaware of the fact that it is completely artificial and arbitrary. This is the birthplace of prejudice. The grid system makes us see things that do not exist. Both our logical and emotional selves are influenced by it. We act in response to the imaginary lines that were arbitrarily drawn for the sake of convenience. Eventually the accumulation of the tangible reactions to the imaginary grid, makes the whole phenomenon real. It becomes a social problem that cannot be simply dismissed.

If one cannot see that the reality has no such grid system implied anywhere, whether you are for or against it, makes no difference to the perpetuation of prejudice. There is nothing wrong with the grid system. It is a powerful and effective tool to communicate and understand each other. It is silly to be for or against it. It is not something that one should dedicate one’s life to. As long as you take the grid for reality, you act mythically. Even if your cause were something noble on the surface, you would, in the end, only perpetuate the myth. From the myth, pain and suffering follow.

Language is our ultimate curse and blessing. Like a powerful gun, those who do not know how to use it properly will shoot themselves in the foot.