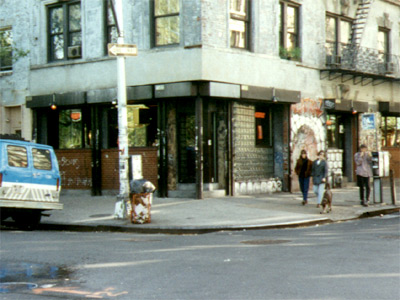 This is Alcatraz. It was a punk bar on the corner of St. Marks and Avenue A. Right across Avenue A is Tompkins Square Park. Alcatraz served their poison to the punk and the metal crowd. I’m not sure if the punks came to Tompkins because of this bar or the bar came because of the punks in Tompkins. In any case, they certainly contributed to the development of the punk community in Tompkins, for better or worse. The community is still there to this day, even after the riot and the following overhauling of the entire park, though it is substantially smaller than what it used to be.

At the same location now is a Japanese restaurant that I have never been to, and they have made a big mistake of installing big awnings all around the corner, providing the refuge from rain for the punks and the homeless. Most East Villagers that I know don’t mind the homeless people roaming around the neighborhood so much, but they all hate the punks. (I’m an East Villager as well, just in case you didn’t know.) The punks’ existence in East Village is a weird one. The problem is that most of them are in fact from the suburbs of Connecticut and the likes. Thus, spiritually, they are the antithesis of what downtown New York is about. Behind the smeared dirt on their faces is a delicate skin that hasn’t seen any true hardships of life. They simply got tired of living in a greenhouse, and so they decided to venture into the urban jungle. Many of them, I believe, still hold ATM cards in their pockets. They panhandle out of their own amusement, lacking in any sincerity or desperation. One eventually grows tired of seeing them on the sidewalks. From this perspective, I’m glad that Alcatraz isn’t there anymore. I think I’ve only been there once during my college years, and there wasn’t much inside that I miss either. I guess it’s a piece of East Village history that’s better forgotten.