Yesterday morning as I was walking toward the subway station, I heard a big bang. I had no idea what it was, but I thought at the time that it could turn out to be something big. Had I looked downtown, I would have probably seen the smoke and the fire. (From Houston Street, where I was walking, the World Trade Center towers used to be clearly visible.) I got on the F train at the station on Second Avenue and Houston Street, and got off at the 23rd Street station as usual. As I walked up 6th Avenue, I saw a crowd of people looking downtown. I wondered what it was all about but didn’t bother to look downtown. Once I arrived at work, one of my co-workers, Laurens, told me that an airplane had smashed into WTC. We switched on the TV and there they were; both of the towers on fire.

We were glued to the TV. My boss, Manny, took his Betacam and tripod to the roof of our building. I stayed and watched it on TV, thinking that the TV would provide a better view of the incident. As I was watching it, one of the towers crumbled down. This was impossible to believe. After that, I too went up to the roof. I had never been to the roof before, and I was not aware that we had an unobstructed view of the WTC. I saw one of the towers still standing and on fire. I couldn’t figure out how much of the other tower was destroyed since it was heavily covered in smoke.

We stood there and watched for about half an hour and then I heard people screaming from other rooftops around us. I realized that the other tower too was crumbling to pieces. Seeing this all happen with my own eyes gave me such a different impression that I was glad I went up to the roof. We are so used to peace that when something of this magnitude happens, we have a hard time comprehending what it means. Seeing it from the rooftop helped me realize that it isn’t the same as watching a Hollywood movie. But even after seeing it with my own eyes, I still had a hard time comprehending.

What made it even more real was that Evan, a cameraman we work with, came by covered completely in dust escorted by two FBI agents. His video camera too was covered entirely in the dust. He was on a job shooting in the WTC area. Now I think about it, he probably was meant to be there. It’s just the kind of incident that he loves shooting. After the first tower was hit, he began shooting the scene of the disaster, walking around interviewing people. Then at one point, he decided to park his camera on a tripod and framed it right up to the top of the towers. It could not have been more perfect in terms of timing and framing. He framed it as if he knew that the second plane was about to hit the other tower. Most other cameramen were zoomed into the first burning tower when the second plane hit the other, so they had to pull back immediately to see what they had missed.

Evan, on the other hand, had the camera framed with the second tower prominently in the foreground. Into it, came the second plane, clearly visible, and identifiable. After that, he went around again to shoot some more of the surrounding scenes. And, amazingly he again decided to rest his camera aiming at the second tower. Soon after, the tower started to collapse on him. A massive wave of smoke and debris was darting toward him, growing in size exponentially. As soon as he ducked under an emergency vehicle, he was completely swallowed up by the smoke and the dust. The video, at this point, went pitch black. The camera was working fine. He told us that it was literally pitch black. He could not breathe or see. Some large pieces of debris fell right next to him. He got out from under the vehicle and tried to find his way in the darkness. Then, two men suddenly came out of nowhere and pulled him into a building nearby. They turned out to be FBI agents. He came up to our office with them because the agents wanted a copy of the video he shot. We made a copy and gave it to the agents.

I looked through my address book to see if anyone I know could have been down there. I knew Amaury worked in WTC, but for some reason, I knew that he was going to be perfectly fine, and he was. I was a bit concerned about Nilka since she goes through WTC on her way to work. The phone systems, both land and cellular, were practically dysfunctional. I could not get through to anyone. I also was concerned about Douglas since he worked in that area too. Everyone turned out OK in the end.

On the way home I saw the entire downtown area covered in smoke and dust blowing across the river to Brooklyn. Warner had told me earlier that all sorts of paperwork made it across the river. At home, Roxanne and I watched TV all night long. It was hard to go to sleep. 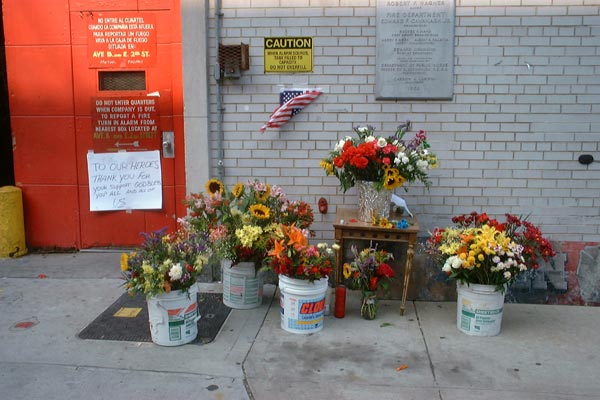 On the second day, the city seemed depressed. Everyone calmed down from all the frenzy and shock. Now it was time for the reality to sink in. It wasn’t just a bad dream. Manhattan was closed for the most part. Below 14th Street, no cars were allowed. Most of the businesses were closed. We found out that the fire department across the street from my apartment lost six firefighters.

Roxanne and I went to a Middle Eastern restaurant for breakfast. Not many restaurants were open, and because of that, those that were open were very crowded. It seemed that most people did not go to work. After breakfast, we went back home to watch some more TV. We went through phases of turning it on and off. After a while, it got to be too stressful to watch. Around 3 PM, we decided to step out. We called our friend, Kee, and all of us decided to bike up to my work. There was not much traffic. It was actually nice to be able to ride a bicycle in the middle of the streets. At work, Manny was there, and we just sat around the TV for a few hours. It’s difficult to think about graphic design when there is a threat of war. It seems so irrelevant and meaningless. At this point, a full-on recession is pretty much guaranteed, just as it happened after the declaration of Gulf War. There is much to worry about.

We biked back home. Roxanne and I dropped off our bikes and went out to an Italian restaurant near home. I can hear everyone talking about the same thing. I got a sense, not just from the restaurant, that many people were feeling defeated. Avenue B was eerie, very few people on the street. On weeknights, it is usually filled with NYU kids and the bridge-and-tunnel crowds. It reminded me of school days, more than ten years ago, when the East Village was still too dangerous for outsiders to come in.

In bed, I felt a bit scared of what could happen next. I didn’t hear much of the usual traffic noise, but distant sirens were constant. “OK,” I said to myself, “enough with the doom and gloom,” and went straight to sleep.