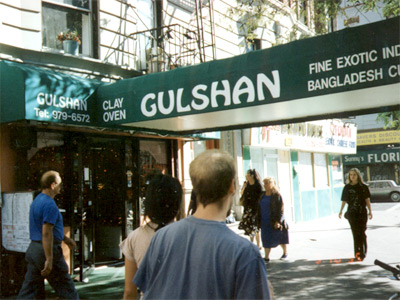 Gulshan opened some time around 1991. At the time it was one of the most upscale Indian restaurants in the 6th street Indian district. It was owned by a guy who owned a few other restaurants on the same block, including Sonali. I used to see the same wait staff in several of them that I went. Gulshan was also one of the most spacious, which was rare in that district. At the time, I was getting frustrated with how tightly tables were arranged in Indian restaurants. When I found Gulshan, I was very happy that they did not have to carry their sizzling Korai dishes right above my head. Gulshan, partly because of this reason, became popular with birthday crowds. I had one of my birthdays there too. Their top attraction was their clay oven which was in a glass room so that the customers can see their Nan bread being baked right in front of their eyes. When Gulshan first opened, they were so eager to win customers that the cook inside the glass room would, if you looked his way, put on a little show for you. The clay oven did make a big difference. Any items on the menu that required the use of the oven were definitely some of the best on the block. Gulshan went out of business several years ago, and now on the same location is a very Westernized Indian restaurant called “Baluchi’s” which raised the bar for other restaurants on the block in terms of quality. But, I do miss Gulshan. For me, it was the best of the budget Indian restaurants, which is an experience in its own right.