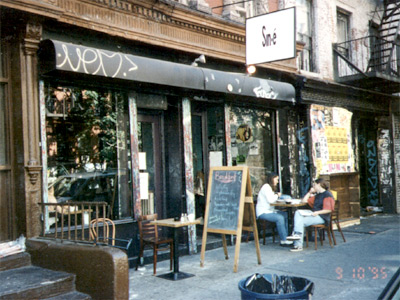 Remember this? This is Sin-é. I was told that it means “here it is” in Gaelic. And, the same owner once had another bar a few doors down from here called An-sha (I can’t remember the spelling), which supposedly meant “there it is.” Sin-é used to be the Irish central of the East Village. Around the mid 90?s, the East Village saw a flood of young Irish people come in because of the Green Card lottery which was mainly targeted for them. Sin-é used to be packed full of them and those who could not get in would pour out onto the sidewalk. Some famous Irish musicians had performed there, including, I believe, Sinead O’Conner. Now most of the Irish youngsters seem to have gone back home. As if NYC was one big nightclub, they came, partied hard, and then left.