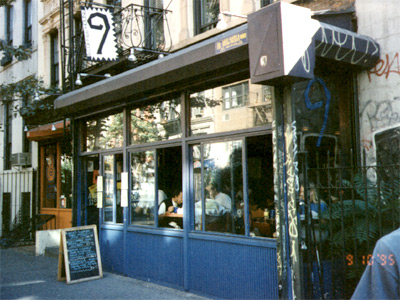 This is on St. Marks Place between Avenue A and First Avenue. This location probably had more restaurants come and go than any other in the East Village. When I first moved to the East Village in 1990, it was a Middle Eastern restaurant, the name of which escapes me now. It was actually a very good one. They had one of the best babaganush I ever tasted. Middle Eastern food is often considered to be low-end take out food like Chinese, which is a shame considering how good it can be. This restaurant offered that opportunity to taste the high-end Middle Eastern. Unfortunately the owner of the restaurant was into the idea of having live performers at the premise. Some of them were quite inappropriate. Once when I was dining there, a girl singer/keyboard player took her shirt off and, wearing only a bra, started screaming as she banged on her keyboard. I believe that the live performance is what drove that restaurant out of business.

After the Middle Eastern restaurant, a cafe called “9? opened which is pictured above. It was originally started by a middle-aged couple from Long Island, then, after several years of successful operation, it was sold to a Spanish fencing teacher, named Pache (not sure about the spelling). The cafe was a big success. I frequented there. They served coffee in an individual French press. On their walls, they featured works by local artists. After Pache took over the operation, they went downhill. He was a nice guy, but he didn’t quite have a passion for running a cafe. He was more into the bar that he opened next door, called The Hilt where he served a small selection of tapas. Neil Colligan and I used to go there to have a drink called Kalimotxo which is wine and Coke, 50/50. Pache was pretty proud of that drink, and told us that in Spain the Coca-cola Company sold premixed, canned Kalimotxo. I’m not sure if that’s true.