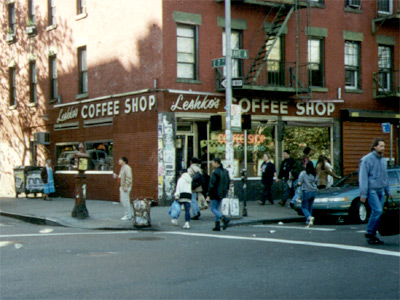 This used to be my breakfast spot. I would call up my ex-friend Neil Colligan, then a passionate film director, who also lived in the East Village, and we would meet at Leshko’s for their dirt-cheap breakfast special. We talked about filmmaking, about the girl he took home the night before, about the artist collective that we were going to form, etc.. We were young.

It was one of the classic Polish diners that are now disappearing one by one. I suppose they ran out of their lease and could not afford the rent increase. Now at the same location is a trendy diner under a completely unrelated management who took the name “Leshko’s”. At first, some people thought that Leshko’s simply went under a major renovation as we saw happen with Veselka and Teresa’s, but I could tell that it was not the same management. The sensibility was too different to be coming from the same people. Besides, the staff is entirely new. Frankly I miss the old Leshko’s. The new one isn’t bad, but the low-end Polish diners are now becoming an endangered specie in the East Village. Sometimes you are in a mood for watching an old Polish man sitting at the counter flirting with a middle-aged Polish waitress.