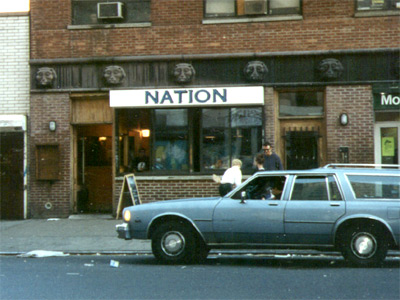 I believe this one too was taken in 1995. Nation was a cafe by day and a club by night. It was a great business model. The location and the space allowed for it. In order to get rid of any smoky smell left over from a previous night, the front windows would be wide open in the morning to get some fresh air. So, it was bright and airy in the morning, which was good for the breakfast crowd. At night they drew curtains. I frequented there in the morning as well as at night. For breakfast, between Nation and Limbo which was right across the street, I went to whichever one that was less crowded. At night, Nation turned into a happening dance club with a live DJ playing great music. What was unfortunate for Nation was that about a year after it opened, Giuliani banned dancing at bars. Every bar had to put up a sign that said it is illegal to dance. When I first saw it at Nation, I figured it was a joke, but I asked the bartender why he put the sign up. He told me that it was not a joke, but was required by the new city law. I could not believe it. It was like Footloose becoming reality. Nation, for the most part, ignored the law. I used to go there to dance a lot, and I had a great time every time I went. The rumor has it that they got shut down single-handedly by a woman who lived across the street. My friends and I were pissed. A few months after that, Bagel Zone opened.

I have to say that, for me, Nation was one of the most memorable places in the East Village. I have to thank the people who ran the place for all the good memories.