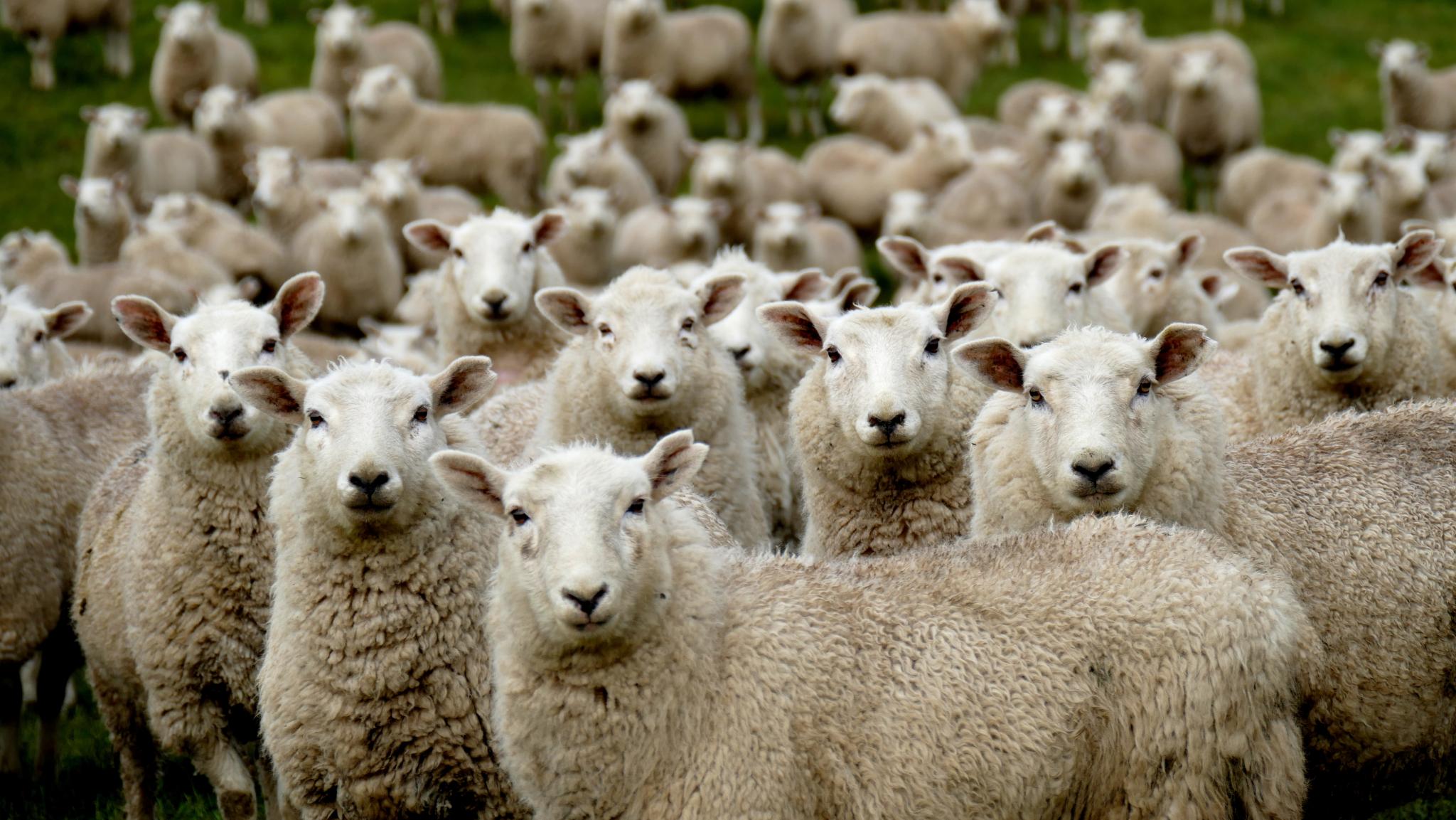 Photo by Andrea Lightfoot on Unsplash

Our reliance on social proof to filter and curate content is exacerbating the problem of income inequality. Let me explain how.

The age-old adage that “success breeds success” is true. We don’t even need scientific proof for it; we see the signs everywhere. Most notably in the startup community, the people who succeed seemingly always sell their success stories because it’s the most reliable way for them to get more attention. Here is an example. His most popular videos are: “STOP Chasing Money—Chase WEALTH. | How To get RICH” and “I funded Coinbase in 2012. Making 6000x on my best startup investment yet.” Success allows them to sell shovels to gold diggers, a risk-free way to get more attention and make more money.

But, think about it; just because you succeeded at something doesn’t mean you know how or why, just as we cannot prove why something went viral. There is no way for us to determine how much of it was luck. The only thing we know is that, once you become successful, the probability of success for your next project will dramatically increase. We still wouldn’t know how or why you succeeded the first time. What the aspiring entrepreneurs want to know is how you succeeded the first time, not the second time. For that, those who failed could offer insights that are just as valuable as those offered by the winners. In fact, we could argue that the insights from the winners are less valuable since millions of others will try to copy the same formula, flooding the market with the same strategies. From this perspective, learning what not to do is more useful than learning what to do.

NFT initially gave us some hope that it could allow more artists to make a decent living selling art, but the market is already skewing towards the top 1%. Because the NFT market is flooded with artworks you would consider noise, you have to rely on social proof to filter them, as there are no other methods available. Even human curators and gatekeepers are ultimately relying mostly on social proof, online or offline. Take literary agents, for instance; most of them would not take you seriously unless you already have impressive social proof, like the number of social media followers and how many copies of your previous books you sold.

Once you have enough social proof, there seems to be no end to what you can sell. Jack Dorsey, the founder of Twitter, sold his first tweet as an NFT for three million dollars. It feels like an insult to the 99% like he is showing off how easily he can make millions. Clearly, we are over-pricing the products at the top 1%, and this problem stems partly from our reliance on social proof as a way to filter and match supply and demand. This has severe economic consequences.

Income inequality is one of the greatest threats to our social stability. And, although it may seem contradictory, it is also a threat to capitalism. Just as drug dealers do not want any violence (because, in the end, they just want to make money), capitalists do not want social unrest either. Severe income inequality is a sign of an uncivilized society like a totalitarian nation or a corrupt government.

It is also a threat to democracy because fame-breeding-fame leads to those with high visibility having a disproportionate amount of influence over our politics. It feels great when someone like Bill Gates financially backs the cause you believe in, but imagine if he went against you; you’d feel powerless.

Most artists, musicians, and writers are barely making a living these days, except at the top 1%. Even if you are not interested in making millions of dollars from your art, you don’t have a choice. You either make millions or nothing, which is not a good environment to foster creativity. 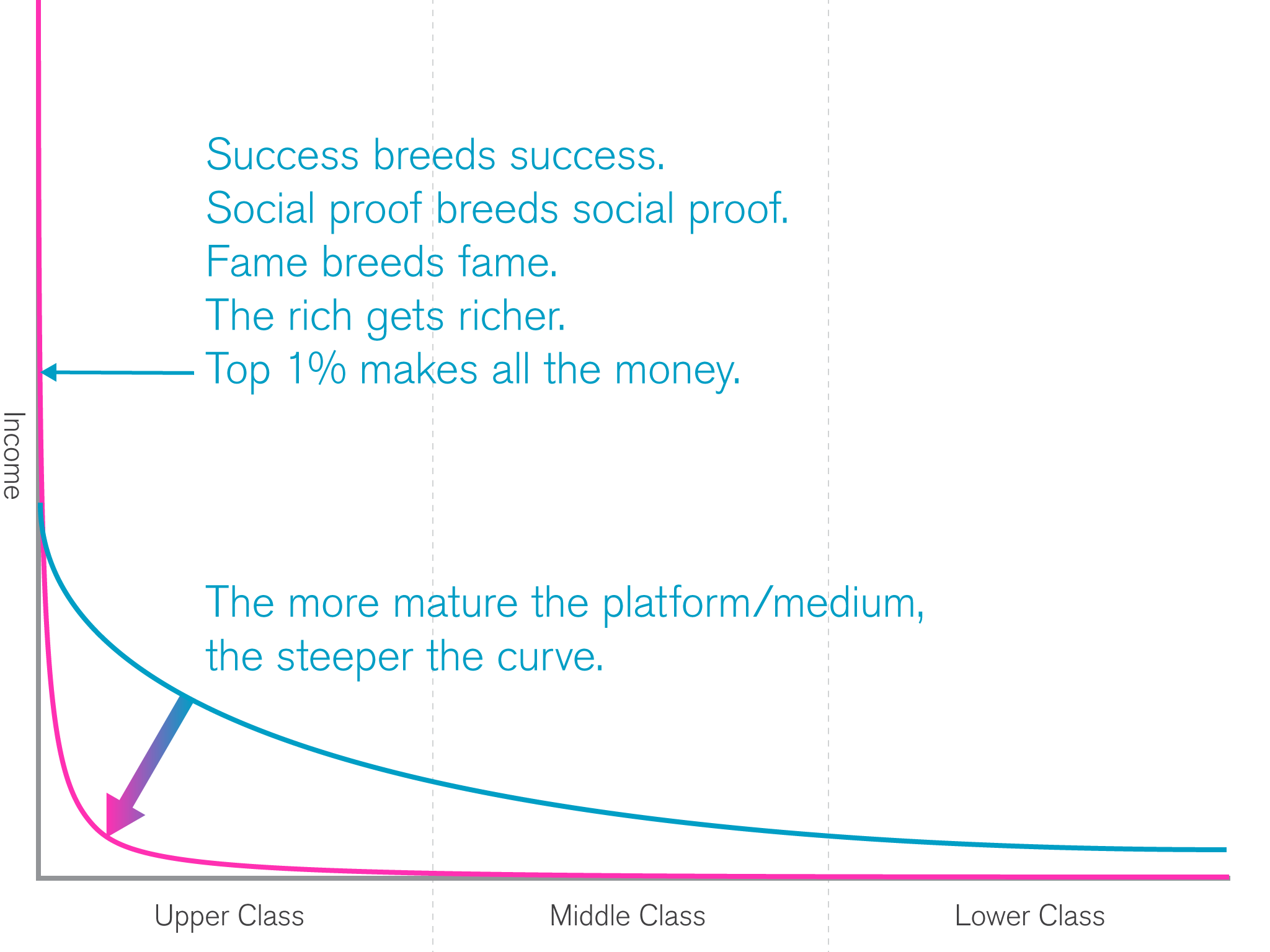 How did we end up in this predicament? The graph above shows a typical income distribution in any given market. Whenever a new market emerges, like iPhone apps and NFTs, the distribution curve is relatively flat at first. When Apple’s App Store first opened, many independent developers made a decent amount of money (represented by the blue curve in the graph). Over time, however, the curve always steepens (represented by the red curve) where a tiny percentage of creators grabs most of the money in the market, leaving the rest to be shared by countless others.

Amazon’s recommendations, “customers who bought this item also bought,” are based on social proof. It won’t work for a brand new product from a brand new seller because there is no data on it, as nobody has bought it yet. This becomes a catch-22 for any new producers and content creators; you cannot sell your product because you haven’t sold any yet.

Let’s say you wrote a story and published it on your website for the first time in your life. You have no social proof, which means Google won’t rank you anywhere near the first page of the search result. Google, too, uses social proof to rank websites. Each website domain has a so-called “domain authority” that measures how influential it is, which is calculated by how many other sites link to your site. Since you just started your own website, you have no domain authority at all. You are likely to get no traffic from Google, but if the same story were to be posted on nytimes.com, you’d get a lot. The fact that you are on nytimes.com is considered by Google to be significant social proof. But, in the end, it’s the same story; the only difference is social proof.

In contrast, if someone famous writes a story and publishes it on nytimes.com, it would get a lot of traffic, but it doesn’t mean this story is better than yours. From the point of view of someone who just wants to read a good story, there is no reason this famous writer should get his attention more than you should. He might indeed like your story better, but currently, there is no way for your story to reach this reader.

What we need is a system that would allow us to measure how interested you would be in any given piece of content without using social proof. This may be possible by using machine learning, a type of artificial intelligence. Let’s say you install a browser plugin that allows you to click on thumbs up or down for every article you read. Once you have rated a thousand articles, we could feed the data to a machine learning tool, like TensorFlow. If it successfully produces a model with high enough accuracy, we could use it to predict the probability of you liking any new article even if nobody has yet to read it. Unfortunately, as of today, this would likely be too impractical and expensive because we would have to generate a model for each reader, but hopefully, you get my point. It’s an example of how we could do away with social proof.

If such a system can be built, we wouldn’t have to waste so much time and attention on advertising. We would be able to programmatically match any products with the right buyers, even if they are brand new.

This, by the way, should not be confused with figuring out if something can go viral, like this. What I’m suggesting isn’t about predicting how popular something will be. It’s strictly about whether you would like it or not. You might have unusual tastes and interests, and if so, the things you find interesting would not go viral. Many content creators and producers are not looking to sell their products to everyone. They have a specific audience they want to reach, which is particularly true with creative products.

If we can free ourselves from our dependency on social proof, we should be able to flatten the income distribution curve. More people would be able to make a decent living creating products and content because the unfair amount of attention that already successful people are getting would be distributed among those below them.

Blockchain technologies and Web 3.0 promise a “decentralized” world, which is often misunderstood to mean a more egalitarian distribution of wealth. We should not confuse a decentralized system with decentralized wealth. They are two separate issues. In fact, there are already signs that Web 3.0 is just another way for the rich to get richer.

As you can see in the NFT market, a decentralized system does not address the problem of centralized wealth. Soon enough, the income distribution curve of the NFT market will be just as steep as any other, where it will function merely as a tool for famous artists to make even more money.

In order to ease the rapidly worsening problem of income inequality, we need a way to curate products and content that does not rely on social proof, and I think this is possible.