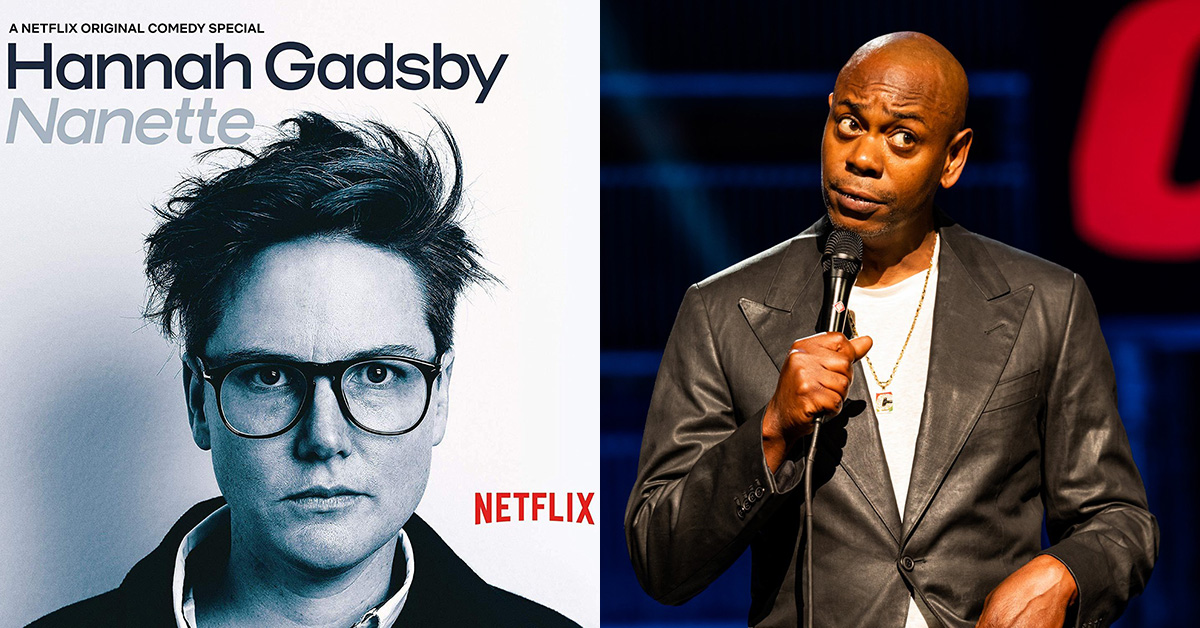 How to Reconcile Hannah Gadsby And Dave Chappelle

I wanted to know what all the fuss was about between Hannah Gadsby and Dave Chappelle, so I watched both Nanette and The Closer.

I agree with Chappelle that Gadsby is not very funny, but she was brilliant in how she deconstructed comedy in Nanette. Her story (the serious story) is powerful; it gave me a better insight into what it’s like to grow up as a homosexual in a hostile environment. Both shows are worth watching, even if you think they are offensive or not funny.

Gadsby explains how she became a comedian and why she wants to stop doing comedy. She says comedy is about creating tension and defusing it. Her perceptiveness and articulation of the process reflect her art history background. It’s true; when comedians tackle controversial topics like race, gender, and politics, they raise uncomfortable questions and then allow the audience to defuse the tension with laugher. Even if you find the racist within you that makes you laugh at the racist joke, the comedian (often the victim of racism) gives you the license to be OK with it. I agree with Gadsby that this is counterproductive.

She knows because Gadsby herself had been doing this in her youth. Whenever uncomfortable questions of her sexuality came up among her friends and families, she found a way to defuse them so that she didn’t have to confront them. It was a delay tactic.

But don’t get me wrong; she is still the victim in this. We cannot expect a young woman to take on an entire society (especially the bigotted one she grew up in). She had to do what she had to do to survive, but it still holds true that it’s a counterproductive tactic or coping mechanism. Now that she is in her “prime” (as she said), she is able to take on the town she grew up in. She can now adopt a more productive strategy; confront it head-on.

But, here is the problem. Gadsby believes that this unproductive tactic is the only way to do comedy. I’d argue that she is wrong. The main reason, I believe, she is not very funny is that she is using comedy as a defense mechanism. She became a comedian because she had to be good at it to survive. But we as an audience can sense this if we are the type willing to confront difficult questions about ourselves. Her defusion comes across as inauthentic.

This is where Gadsby can learn from Chappelle. He doesn’t use comedy to defuse; he uses it to lower our defenses so that he can penetrate us with the truth. This is why his comedy offends so many people; because it doesn’t pander to our weaknesses. He makes us unwittingly lower our defenses with laughter and then forces us to listen to his criticism of us. If it were delivered without comedy, it wouldn’t penetrate our defenses; so, we wouldn’t be listening to him.

Ultimately, what Chappelle wants is the right to speak the truth, however uncomfortable or ugly it is. A psychotherapist might work her way up to it through gentle emotional support to break the bad news, but Chappelle does it by lowering our defenses with laughter. At the end of the day, what Gadsby has always wanted to do was to speak the truth, even if it were to offend the people around her.

Now, without comedy, how is she going to get around people’s defenses? Just delivering the truth directly won’t work. Sure, it should work, but in reality, none of us are that strong. If she tried, our defenses would go up at the speed of light.

We are all bigotted. Prejudice is inescapable. We try our best to deny the racists, sexists, and homophobes in us. Gadsby is criticizing comedians who allow us to defuse these bigots in us, but Chappelle uses comedy to get around our defenses to deliver the bad news: You are racist. To be offended by this is to perpetuate the defusion of bigotry as Gadsby had done growing up, allowing us to deny the bigots within us by laughing away.

I agree with Gadsby and the LGBTQ+ community that there shouldn’t be any bigots within us, but let’s face it; they are within us. You can point your finger and yell at everyone to repress those bigots within, but repression never works. It will rear its ugly head somewhere else like Whac-A-Mole. Repression, like defusion, is just a delay tactic.

Both Chappelle and Gadsby are actually working towards the same goal: to confront the ugly truth within us. Their only difference is the method. If I were Gadsby, I would indeed quit comedy and become a storyteller. She would be a powerful one at that.