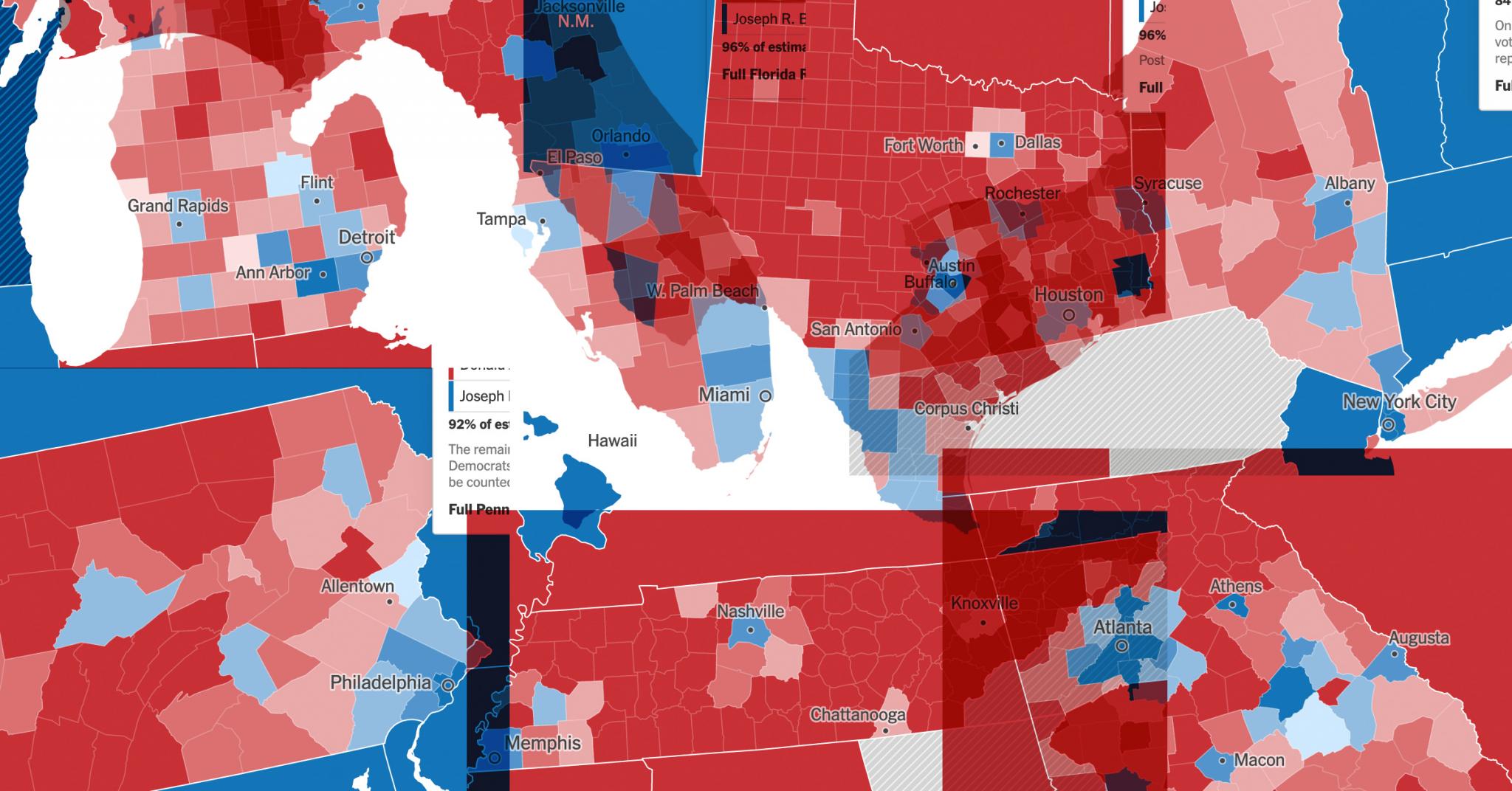 Donald Trump in All of Us

So Biden won. It’s not, however, a big loss for Republicans because they had already achieved what they needed to achieve with Trump; to show the urban elites what they can do if they continue to ignore them.

On New York Time’s interactive map of the election, if you click on any state, you’d see that big cities are blue, and the rest (typically 90%) is red regardless of which state you click. Why is that? It’s because all the highly educated, smart, and talented people move to big cities. We are self-segregating. Although there are many problems with our educational system, this self-segregation isn’t caused by it. Many people were born and educated in the red neighborhoods and moved to the blue cities. They didn’t move into the cities to receive a better education. In fact, New York City schools are not very good.

The political division in the US is not between the north and the south; it’s within each state, between the ruling class and the working class. However, highly educated, urban elites do not realize they have the power to rule the rest of the country because they live in their own bubble.

Different educational levels engender different value systems. Educated elites cannot tolerate what they perceive as idiocy. They relentlessly make fun of the working class Republicans on TV shows like The Daily Show because they are full of glaring contradictions and hypocrisies. But, the only real difference between Democrats and Republicans is that Democrats are better hypocrites. Because they are highly educated, they are good at deceiving themselves and making themselves feel superior by laughing at the less educated.

The reason Trump annoys them so much is that his hypocrisy and double standards are unsophisticated. It’s a projection. Deep down, Democrats hate their own hypocrisy, so when they see someone being obviously hypocritical, they point their fingers at him to make themselves feel like they are not hypocrites. They use Trump as a self-deceiving tool. The hypocrisy of Democrats is more insidious because it functions covertly without anyone noticing.

Similarly, I feel compelled to defend Republicans even though my values lean towards Democrats. The people around me in New York City do not seem to realize how we look to others.

In 2008, the financial market collapsed because of the reckless Wall Street bankers. The economic reality of New York City is that Wall Street is feeding the rest of us. It’s like how Detroit used to be until the 80s. If the government chose not to bail out Wall Street, New York City would look like Detroit by now. All the homeowners here would have lost their homes, just like the rest of the country. Most of us would have lost our jobs too, regardless of the industry. But the government bailed us out because the rest of the country was told, practically at gunpoint, that, otherwise, the whole country would go bankrupt. In exchange, what did we give up? Nothing. Obama continued to hire the same people who caused the financial crisis. While Iceland sent their bankers to jail, Obama continued to work with them. In one of the leaked emails, we can even see a Citibank executive choosing his cabinet members.

It was Bill Clinton who removed the Glass-Steagall Act, which would have protected ordinary banks from high-stakes investment banks during the crisis. This allowed all the banks to take massive amounts of risk and make a lot more money. Most people do not know what the Glass-Steagall Act was, but why should they? The whole idea of representative democracy is that bakers can worry about baking the best bread possible while their representatives fight for their interests. Bakers shouldn’t need to know anything about financial regulations. But the political elites exploit the fact that ordinary people don’t know. They give banking lobbyists what they want because there is no risk to them. Their constituents would never figure out what they did against their interest.

This was happening while the urban elites kept ridiculing the less educated Republicans who lost their homes to the financial crisis, unlike us New Yorkers, whose home values kept climbing, thanks to the bailout. But, do I ever hear any Democrats feeling outraged about this? Of course not. Why would they want to point out something that would make their own lives harder? Given that the news media is filled with the same elites, why would they bother reporting it? Naturally, we don’t hear about what makes Republicans angry. We don’t know the issues they care about because we are largely blind to them. We only pick the issues we care about and feel angry that Republicans don’t care. The elites here were educated in college to be in leadership positions, yet they only care about their own welfare.

Some elites would argue that we do not need to defend ignorant people. It’s their own responsibility to educate themselves. But why should knowledge and intelligence be the standard by which we measure human worth? If someone cannot articulate his position without contradictions, he deserves less respect as a human being?

I’m not saying they need to be protected; I’m merely saying that our respect for each other should not be conditioned on the level of knowledge or intelligence. Even if Donald Trump annoys you because he is full of contradictions and hypocrisies, look into the mirror: you will find the Donald Trump within you. That’s why you hate him so much. We are all hypocrites and full of contradictions. The more educated we are, the better we are at hiding them. When you listen to Trump, you have to see beyond his contradictions, childishness, and temper, and find the sentiments he is channeling. It’s like carefully studying a big cyst on your face to figure out what’s wrong with your health. Because Trump does not moderate his feelings with his prefrontal cortex, we can actually hear the voices of his people. This is not possible through the smooth-talking career politicians.

America is ill. Trump is a symptom of the disorder the elites have created. Our political system is infested with puppets who work for the rich. Our government is a plutocracy. They know how to distract people away from the real problem. The accumulation of wealth at the top has the rural Americans drowning in debts. Urban elites haven’t felt the pain yet, which is why they can afford to talk incessantly about identity politics.

Democrats are very good at looking like they care. They know how to make the right symbolic gestures. They criticize Republicans of being racist, yet New York City’s school system is the most segregated in the whole country, which is largely due to the fact that they live in segregated neighorhoods. This is often blamed on the city government’s lack of effort for racial integration, but if Democrats are so “progressive” and less racist than Republicans, why aren’t they naturally integrating? Why should they need the government to do anything about it?

Alexis de Tocqueville observed this difference between the south and the north in 1840:

So the Negro [in the North] is free, but he cannot share the rights, pleasures, labors, griefs, or even the tomb of him whose equal he has been declared; there is nowhere where he can meet him, neither in life nor in death. ... In the South, where slavery still exists, less trouble is taken to keep the Negro apart: they sometimes share the labors and the pleasures of the white men; people are prepared to mix with them to some extent; legislation is more harsh against them, but customs are more tolerant and gentle.

Nobody here seems to see the contradiction and the hypocrisy. Their choice of the Democratic Party too signals that they care about the less fortunate, as the party was originally associated with the working class poor, but it’s only a symbolic gesture to make themselves feel magnanimous. In reality, they just laugh at how stupid they are.

I hear many Democrats singing praises of New Zealand, saying, “Why couldn’t we be more like them?” because they can ban assault weapons and eradicate COVID-19 overnight. New Zealand can get their acts together quickly because it’s a homogeneous country. They are essentially monocultural compared to the US. This is yet another hypocrisy of Democrats. While they mindlessly use the buzzword “diversity” like it’s a sacred concept, deep down, they long for homogeneity. They wish the whole country would share their liberal values.

What makes America so special is the diversity of opinions and values. It’s a miracle that this country can hold itself together, given how differently people think. That is the greatest strength of this country, yet liberals lament this diversity and ridicule their opponents as being stupid and deplorable while ironically chant about the importance of “diversity.”

Americans are now losing their greatest asset: the ability to respect one another despite the fundamental differences in values. It’s because of the intolerance, closed-mindedness, and lack of curiosity in others. Urban elites are more guilty of this because rural Americans have no choice but to pay attention to what is going on in big cities for their own survival. It’s a great shame that those who have the means to care for others do not.