One of the American precepts that took me a long time to accept was “The squeaky wheel gets the grease.” As a Japanese exchange student in an American high school, when I first saw Jerry Lewis’ fundraising telethon for muscular dystrophy, I thought, “But what about the people with other types of disabilities who have no connections to celebrities? Given that each person can give only so much in a year to charities, wouldn’t he essentially be taking money away from those who are not PR-savvy?”

In fact, this is not just about money; it’s also about people’s attention. All of us have only 24 hours in a day, which means our attention is a zero-sum game. What we choose to pay attention to comes at the cost of our ignorance for the others.

In America, “the squeaky wheel” has become the de facto rule of engagement, and this rule is assumed at every level and aspect of our society. For instance, at a hospital, if you do not aggressively advocate for yourself, you’d be ignored because the hospital staff assumes that you would be vocal if you need anything, and that your silence means you don’t need anything.

The opposite would be true in Japan. If you are aggressive in advocating for yourself, you’d be seen as selfish and likely receive less attention. In fact, the Wikipedia entry for “The squeaky wheel” explains this cultural difference.

Japan is a highly socialistic country; you are supposed to put the needs of the society above your own. Naturally, this is both good and bad. It means individual differences and freedoms are often compromised, suppressed, or disrespected. But when it comes to equitably paying attention to the needs of others, it’s a better system. Most people in the positions of power, like managers and teachers, are used to being attentive to the quiet people/students because they cannot rely on them squeaking to be aware of their needs.

Because this particular value was deeply ingrained in me, when I had to go to the hospital for an emergency in the US, I automatically assumed that they would take care of me if I just sat there quietly waiting. One time, I was “lost in transport” and my bed was parked in the middle of a hallway for hours. My wife had to raise hell to find me. Being a native New Yorker, she is exceptionally good at it, and makes up for my utter lack of this skill.

In this way, every minority group in America must be PR and marketing savvy in order for its voice to be heard and its needs addressed. Everyone plays by this rule: You will let me know if you need anything. The Japanese way would probably be impractical because of the diversity of values and perspectives in the US; it would be nearly impossible to guess what others might need if they don’t speak up. It is therefore not our responsibility as Americans to actively pay attention to those who are not vocal. And, among those who need attention, the competition is fierce. I would say, it has gone beyond “you will let me know.” We now assume: “You will compete for my attention if you need anything.”

How do you compete for someone’s attention? Logical explanations do not grab anyone’s attention. You would have to increase the emotional content of your communication. Whether it’s anger, sadness, pity, or joy, does not matter as long as the emotional reaction is strong. A close-up picture of a cute, starving girl is hard to compete with.

As a strategy, you could get a celebrity to be your spokesperson, make an emotionally moving documentary film, get thousands of people to march in the streets, or vent your anger on Facebook. It’s rather inefficient and unfair, but I think this is the flipside/disadvantage of individualism.

The American liberalism also contributes to this problem. Although the rule of engagement is “You will get my attention if you need anything,” if you are not aware of the plight of the minority groups, you are immediately labeled “ignorant.” But realistically speaking, it is not possible for anyone to know everything. No matter how socially aware you think you are, there will always be countless people whose plights you are utterly unaware of. Consider, for instance, the people who are suffering from extremely rare disorders or diseases. If there aren’t enough people sharing the same experience, no “group” can be formed. That is, they cannot even belong to a “minority group.” How could they possibly get anyone’s attention in our society where we are supposed to squeak if we need anything?

But we liberals pretend as though we know, and the best way to keep up the pretense is not to engage, because any degree of engagement would likely blow our covers, and expose how much we don’t know. This creates a disincentive to engage, and the lack of engagement perpetuates ignorance.

This was one of my motivations when I created AllLookSame.com which tests your ability to differentiate between Chinese, Japanese, and Korean faces. Many Asians were offended that non-Asians couldn’t tell them apart. In my view, such expressions of anger made the situation worse. Non-Asians, particularly those who are politically correct and liberal, would avoid the whole issue altogether out of the fear of being labeled “ignorant.” This simply leads to less overall awareness of the difference between these three cultures. “Ignorant” as they may be, it’s still better for us to talk about it. I wanted to make it easier for non-Asians to broach the subject. Even if someone asked me “Are you Chinese?” I would appreciate this person more than those who avoid the subject entirely out of fear. Through my site, some of these over-confident Asians realized that it’s not as easy as they had assumed.

In the US, “activism” is seen positively but the fact that it is needed to get any attention is itself a problem. The question for me is how we can get people to become naturally curious about other points of view. Liberalism and political correctness appeal to our senses of guilt instead of curiosity. The problem with guilt is that it requires constant reminders and pushing. The power of curiosity is that it’s generative, meaning, it naturally expands on its own.

...I think that protests about these things, contrary to what has been said, will give it the kind of life that a fire is given when you fan it, and that it would be best to ignore it, put your attention elsewhere, take actions of another kind of positive nature, rather than to continue to give life to the negative by negating it.

So, what do these “actions of another kind of positive nature” look like in practice? In his own case, he unintentionally became a spokesperson for the Eastern philosophical values, particularly of Zen Buddhism. His music demonstrated them, instead of just telling us what they are. His 4′33″ was one of the most influential works of art in the twentieth century. It seduced many Westerners into learning more about the Eastern ways of seeing. 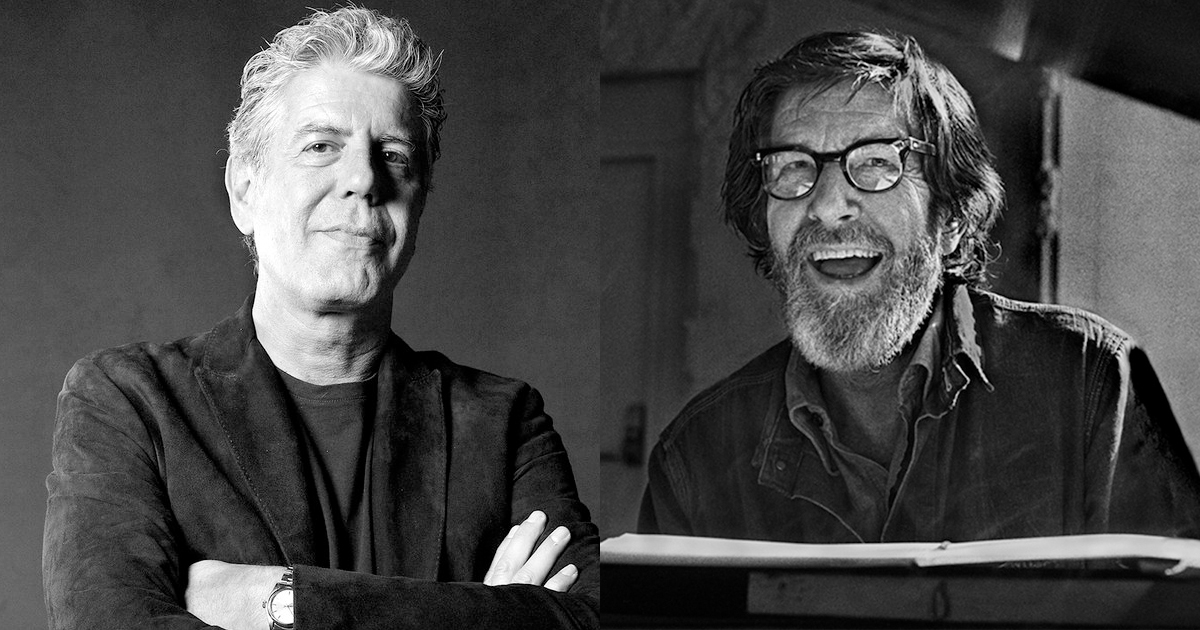 Another example of “actions of another kind of positive nature” is the work of the late Anthony Bourdain. Working in the kitchens of New York City, I believe, he became aware of the great contributions of the cultural/ethnic minorities and how little credit they receive for them. He could have taken the obvious route of political activism, but, instead, he focused his energy on promoting their cultures through their cuisines. They have worked tirelessly for white chefs in the US to promote the white European cuisines. He wanted to return the favor.

Even for the political division among white Americans, his focus was on the positives:

I’ve spent a lot of time in gun-country, God-fearing America. There are a hell of a lot of nice people out there, who are doing what everyone else in this world is trying to do: the best they can to get by, and take care of themselves and the people they love. When we deny them their basic humanity and legitimacy of their views, however different they may be than ours, when we mock them at every turn, and treat them with contempt, we do no one any good. Nothing nauseates me more than preaching to the converted. The self-congratulatory tone of the privileged left—just repeating and repeating and repeating the outrages of the opposition—this does not win hearts and minds. It doesn’t change anyone’s opinions. It only solidifies them, and makes things worse for all of us. We should be breaking bread with each other, and finding common ground whenever possible. I fear that is not at all what we’ve done.

Escalating the tension between two nations or cultures is fast and easy. The opposite is a slow, invisible process. This is partly because anger is a fast emotion whereas peace is a slow one. With anger, we can go from 0 to 100 in a matter of milliseconds. Achieving the sense of peace, on the other hand, is a long, seemingly never-ending, process.

Expressing anger in a street protest is easy and satisfying for your ego because it’s highly visible, but it engenders more anger from the opponents. Even if the opponents are cornered into defeat, their hearts would not change, so the same problem re-emerges in other forms.

Making peace is indeed hard work because there is no quick solution to it. As Cage said, negating the negative doesn’t lead to peace even if it may seem to remove the problematic symptoms temporarily. The work towards peace is invisible because it is spread over a long time. For instance, a faint amount of it may exist in every arepa made by a Venezuelan cook. The appreciation of it may inspire the customers to learn more about Venezuela and how they see the world. A better mutual understanding between two cultures can lessen the need to squeak so loudly.

Americans love easy and quick solutions. They also love heroism. Combine these with the “squeaky wheel” principle, there is too much attention on negating the negative and too little on doing the invisible work towards peace. The politicians in particular do nothing but the former and act like heroes. Cage’s advice seems counterintuitive but I do believe that we would be better off ignoring those politicians and making something that inspires curiosity in others.