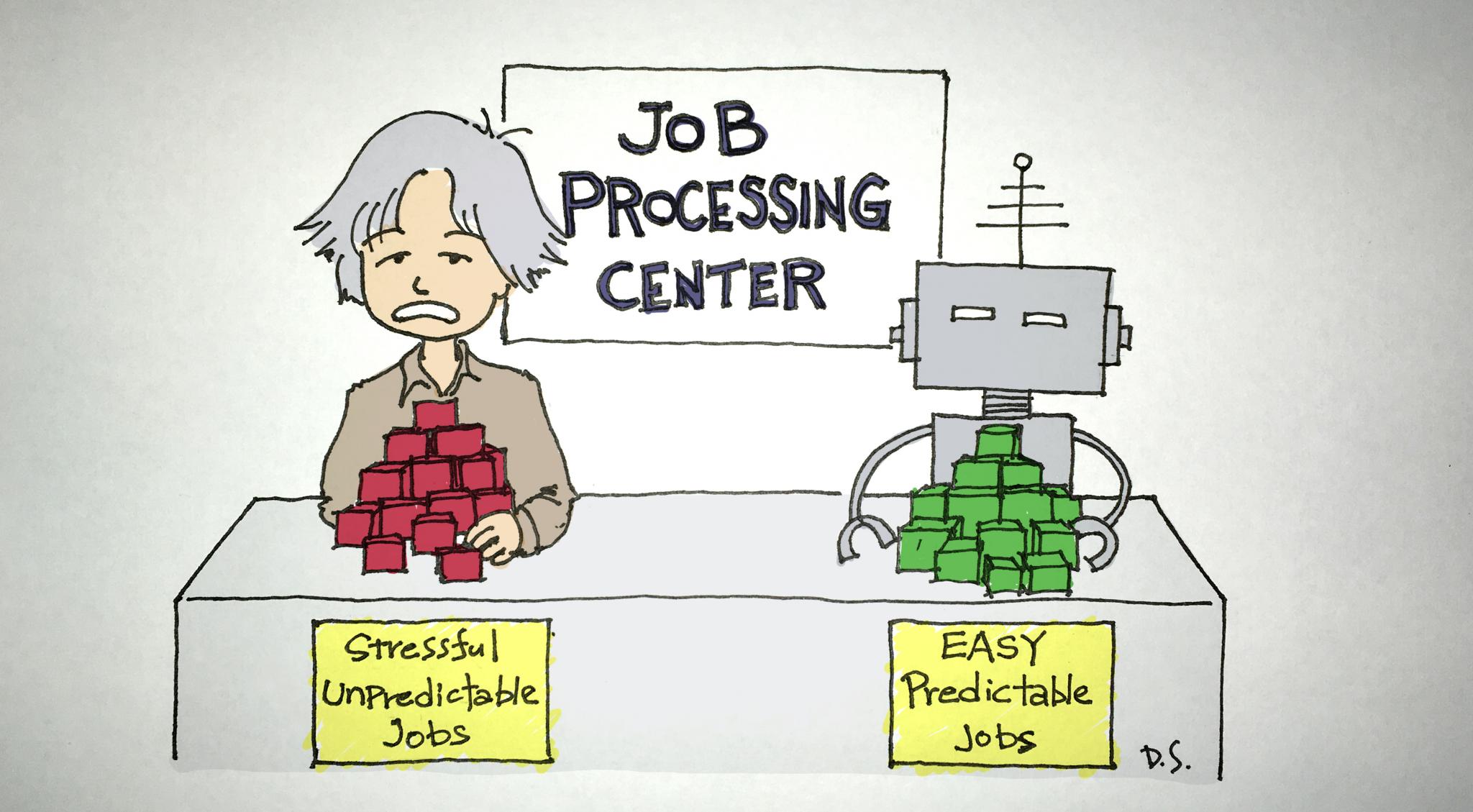 Why We Need to Stop Innovating

One of the offices I worked in had a refrigerator with a sign that said, “Please make sure the door is closed!” As you might imagine, there was a small war over this matter. As human beings, it’s natural for us to blame other humans whenever we see a problem. We reflexively ask ourselves, “Whose fault is it?” This blinds us from seeing systemic problems. In this particular instance, after I was caught leaving the door open unintentionally, I pulled out the entire fridge and lowered the two hind legs so that it would lean back slightly causing the door to close automatically. After that, the door could not stay open even if we wanted it to.

We have a similar situation today in politics. Not just the US, but the whole world is divided. Brexit was just the beginning. There are many systemic problems but the main culprit that has everyone attacking each other, I believe, is technological innovation. Yes, innovation.

One of the problems with our language is that certain words are culturally established as being superior to their counterparts, and once this happens, we habitually act on these assumptions without critically thinking about them. Some generations ago, men were thought to be superior to women. Everyone, including women themselves, went along with it. Once one term gets privileged over the other, it’s hard to reverse it because it seems counter-intuitive to everyone. But once the reversal is complete, the old way appears shocking and appalling, like, “How could we ever think women were inferior to men?”

When was the last time you heard anyone use the term “innovation” negatively? You probably couldn’t think of it. Perhaps never. “Innovation” is practically synonymous with “good,” but I’m going to argue here that it is causing many of the most serious problems in the world today.

Amazon is one of the most innovative companies. They innovate to make our lives more efficient. That sounds good but let’s think about what that really means. I subscribe to Amazon Prime and make use of many services it offers including buying books on Kindle, finding a variety of products at the best possible prices, and watching movies instantly. My friend—let’s just call him John—doesn’t like technologies, so he has never used Amazon. This means, every time he wants to read a book, he needs to travel to a bookstore, or a few of them unless the book he wants to read is a bestseller that every bookstore carries. This will take a few hours of his time. I spend less than a minute to do the same thing on Kindle. On weekends, John runs errands to get stuff he needs for the week from a drugstore, hardware store, electronics store, grocery store, office supply store, etc.. This can easily take half a day. I can do all these in about ten minutes. John travels far to a video rental store because most of them have gone out of business. Again, this takes him over an hour because he has to make a round trip to return them too.

This is an example of how much time I save by using just one innovative company. You could probably imagine how wide the efficiency gap is between John and I if you were to take into consideration all the other innovations I use and he doesn’t. I would not be exaggerating to say it takes two days for him to do the same things that take me only a day. This means, every year, I could take a six-month vacation if I were to live his life, but I do not live such a luxurious life. Why? Because I’m not the only person who is using Amazon. My life would indeed be luxurious if I were the only person (or one of the few) who had access to those innovations. As soon as they are available to everyone, what we are expected to achieve in the same amount of time changes. Even if I’m twice as productive as I was before, I don’t make twice as much money. My income does not change (so my vacation time doesn’t either). Needless to say, John’s income has been steadily falling every year because he doesn’t adopt these innovations.

Let’s use an example of graphic design. Today with all the desktop publishing tools, one designer can crank out a hundred design jobs in a month. Fifty years ago, it would have taken the same designer a month to do just one of those jobs. His pay would be the same if we adjusted for inflation, and the time he spends working would also remain the same. But how about the amount of stress he has to manage?

Without the tools of efficiency, many of his hours would have been spent on mindless tasks like drawing individual letters, cutting up papers, and gluing them. Since there was little to no uncertainties involved in these tasks, there was no stress. Also, even though we don’t like doing only mindless tasks, a mix of them is enjoyable to us especially when they involve doing something physical. Today, these manual tasks are handled by technologies which are very good at processing predictable and repetitive tasks. We are therefore left with managing what these technologies cannot process well: unpredictability. That’s right; our wonderful innovations are taking all the easy, unstressful tasks away from us, and relegating all the stressful ones to us humans. Because of this, our stress levels keep increasing, but we are still getting paid the same.

Wait, but there is more.

Innovations also force us to learn new ways of doing things. The pace of innovation is increasing. Because many different people are innovating at the same time, there is no limit to how fast innovations can be introduced to the world. It is inevitable then that at some point in the future, each innovation would last only for 15 minutes before it is supplanted by another innovation.

This would not be a problem if the speed at which we can learn a new skill can also be increased without a limit, but alas this is not the case. How fast we can learn something has a hard limit just like how fast we can run 100 meters does. We have already reached a point where a new innovation is introduced to the market before we had the time to learn the previous one. This is clearly observable in the world of computer programming where the pace of innovation is among the fastest. Each new programming framework lasts only about a year before something better is introduced, but it takes about a year to master each new framework or programming language.

The most important skill the college students of today need to learn is not computer programming, business, or marketing; it’s how to learn anything fast. This is the key to survival. Learning specific skills in college is a waste of time because, by the time they are out of school, they will be obsolete.

This rapid pace of innovation is highly disruptive for our lives. We not only have to learn new skills every year, but also have to change our careers every ten years or so, because innovations can obsolete an entire market or industry. It does not take a rocket scientist to realize that this pace will only increase. How would it be humanly possible to switch our careers every month?

Right now, the pace of disruption is still manageable for the smart people at the top, so the arrogant ones are chest–thumping and calling the people below them lazy. Well, soon enough, the forces of innovation will get them too. It’s only a matter of time.

Technology today is so complex that no single person, no matter how smart s/he is, can fully comprehend how it impacts our lives. Most people have no clue, but they know what they are feeling: the stress of unpredictability and disruption. Just like my story of the refrigerator above, they feel they have to blame someone. The rural, conservative America and the urban, liberal elites are blaming one another. The immigrants are picked as scapegoats. Christians and Muslims are accusing one another of destabilizing the world peace.

What they don’t realize is that we are all feeling the same pain. Nobody likes to see their food go bad because the refrigerator door was left open, but it’s not anyone’s fault. If we want to reduce our stress and be able to relax and enjoy life more, we need to stop the endless pursuit of innovation for the sake of innovation. “Innovation” is neither good nor bad; it depends. Our current problem was created by the fact that we never questioned the superior status of it. We pursued it blindly and religiously without critically thinking about what innovation truly means for us.

This is not a problem a single person can solve or do anything about. If you try to solve this problem alone, you will just be like my friend John who lives on the verge of poverty. This is a systemic problem that requires a coordinated effort. But at the individual level, we can at least stop thinking about “innovation” as something unquestionably good, and stop admiring people just because they were innovative. They are not making your life any better; only more stressful.