You can’t argue with a Deconstructionist. Of course he is right. Everything is relative because linguistic meaning is fundamentally indeterminate, and every attempt to go outside of language will inevitably fail. This leaves us nowhere. What are we to do?

Realization of the truth of Deconstruction reminds me of the ox-herding story of Zen. Indeed Zen Buddhism is deconstructive. The paradigm of Western philosophy shifted when the philosophers began questioning the tool of their trade: language. Zen Buddhists have always been keenly aware of the bewitching nature of language, and thus avoided using it as a tool for their pursuit. That’s why they have no written scriptures. 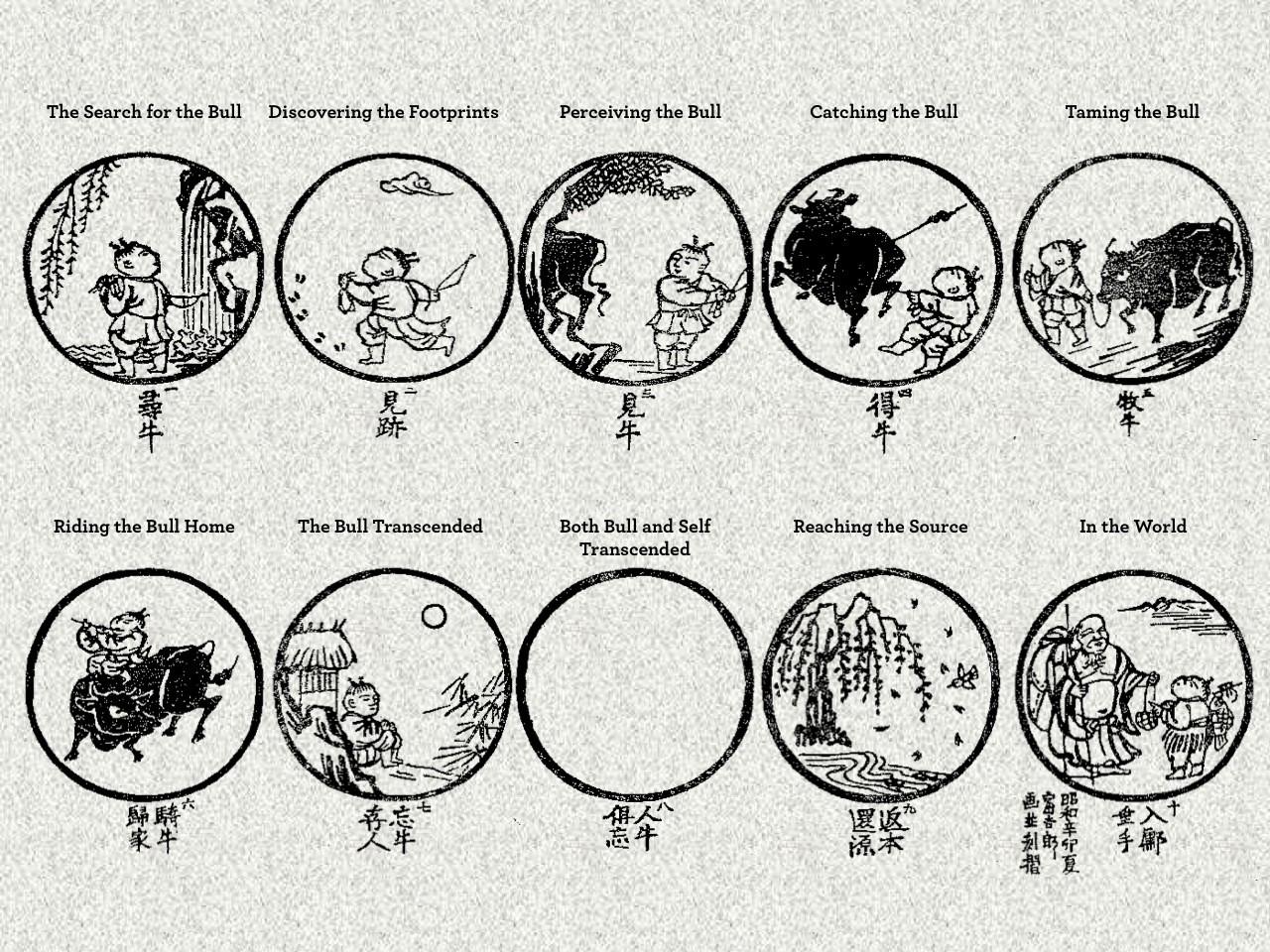 I’m not equating Satori (enlightenment) to the understanding of Deconstruction but conceptually they are quite similar. In the ox-herding illustrations, the state of nothingness that one reaches towards the end is equivalent to the state where everything has been Deconstructed. Nothing sacred, permanent, and absolute remains, including one’s ego or idea of self.

Interestingly enough, some versions of this ox-herding drawings end with this nothingness. What is to be done after attaining enlightenment? According to the extended version, one goes back to the ordinary world. Now the question is: What is the difference between where one started and ended?

For those of us who have accepted the truth of Deconstruction, this is the same question we face. What comes after Deconstruction? It’s easy enough to keep Deconstructing everything in sight, but what do we achieve by it? I’m afraid the result is overall negative.

Those who are smart enough can theoretically understand the logic of Deconstruction and how impossible it is to construct any argument or assert any value to be superior to others, but this theoretical understanding leads to repression because it is not rooted or grounded in their own realities. “A man convinced against his will is of the same opinion still.” This repression may lead to nihilism where apathy or even depression dominates, or to a backlash where dogmatism or even totalitarianism dominates.

Tired of everything being relative and unable to take any rational steps, some will reject Deconstruction as an absurd idea. Neoconservatism and white nationalism, I believe, are examples of this backlash against the relativism Deconstruction imposes on our rational minds.

On the liberal side of the political spectrum, this problem is even more convoluted. Their understanding of Deconstruction is second-hand. The meaning of it is lost in the game of telephone. They are familiar with the trappings of Deconstruction without understanding the historical process that lead us to this point. Feminism (Deconstruction of the patriarchy) is a good example. Most people by now know the politically correct ways of treating women as the topic has been ubiquitous in the media for a few decades. Do’s and don’ts have been codified as easy-to-follow instructions, but following any such prescriptions contradicts the very tenet of Deconstruction.

At the surface level, the liberals are doing all the right things without understanding the principles of Deconstruction. Their problem is, therefore, invisible. For instance, what it means to be “tolerant” is simply a prescription they follow. They are supposed to be friendly towards gays, lesbians, people of other religions, races, cultures, etc.. They have a checklist they can refer to in order to be considered “tolerant.” But such a way of being tolerant is not tolerance at all. By now, most people who live in diverse communities are familiar with homosexuality, other races and religions. The differences no longer feel so foreign. Accepting what’s already familiar is not tolerance. The understanding of what it truly means to be tolerant is lacking. So, when they come across an idea, belief, opinion, or value that is not included in this checklist, they become openly intolerant as there is no risk of being ostracized by their communities of liberal friends.

For instance, white supremacism is excluded from this list. Free to be intolerant means, their normal protocols for resolving disagreements do not apply to the excluded groups. Like with terrorists, they do not negotiate with anyone who violates their sacred values (like racial equality). In other words, they are not any more tolerant than the conservatives; the only difference is that they choose a different set of values to be tolerant of. And, this set is predefined by the dominant discourse of the times, not a result of independent, critical thinking.

This trend of intolerance of “intolerance” is getting worse. The last election between Donald Trump and Hillary Clinton has made it abundantly clear that if this trend continues, a civil war would be our only option to resolve our differences, as neither side would be willing to negotiate with the other. To both sides, the other is a moral equivalent of terrorists or Nazis. There is no appreciation of what roles each side plays in our society. The liberals are relentlessly focused on progress, viewing the conservatives as nothing but a hinderance. If a nation is a long line of hikers, the liberals are at the front of the line trying to figure out which way to go and the quickest way to reach the destination. The conservatives, on the other hand, are at the end of the line, trying to understand our limitations and making sure nobody is being left behind. Both ends have many gripes about each other but are necessary for the healthy functioning of a nation.

The lack of respect and understanding for one another, I believe, is being exacerbated by the Internet, particularly by the social media. Today, the efficiency of the Internet allows us to find exactly what we want. We have no reason to tolerate things we don’t like. In terms of race and sexual orientation, the urban liberals might live in a diverse community of people, but in other invisible dimensions, they are able to surround themselves with others who share increasingly similar values. The efficiency of the information technology allows them to be pickier, which gives them less reasons to tolerate those who disagree with them.

The more homogeneous your world becomes, the more extreme the outsiders would appear to you. Even your own country, it seems to you, is filled with terrorists and fascists with whom negotiation is out of the question.

Intellectually, the West has been ahead of the East, but it’s one thing to understand something conceptually, it’s quite another to be able to practice it. Reading a book on music theory, would not allow you to improvise on a piano. By the same token, a theoretical understanding of Deconstruction does not necessarily lead to an effective or beneficial practice of it. It can even be detrimental. When you think too hard about how you walk, you start to walk funny. So, how do we practice Deconstruction?

In “The Geography of Thought,” Richard E. Nisbett explains the different ways conflicts are resolved in the East versus West:

Conflict between individuals in Western countries is handled to a substantial degree by legal confrontations, whereas it is much more likely to be handled in the East by intermediaries. In the West, the goal is satisfaction of a principle of justice and the presumption going into the arena of conflict resolution is typically that there is a right and a wrong and there will be a winner and a loser. The goal in Eastern conflict resolution is more likely to be hostility reduction and compromise is assumed to be the likely result. Westerners call on universal principles of justice to push their goals and judges and juries feel obligated to make decisions that they believe would hold for everyone in approximately similar circumstances. In contrast, in the East, flexibility and broad attention to particular circumstances of the case are earmarks of wise conflict resolution.

In other words, in the East, the truth of any conflict is already Deconstructed by all parties involved. Determination of right and wrong in absolute terms is assumed to be irrelevant.

Even if we have a mechanism in place that can force a resolution without a compromise (e.g. court and election), the losing side “is of the same opinion still.” Nothing is truly resolved and nobody truly wins. The emotional wound and the rift between the two sides deepen and the future conflicts become more intense and personal.

To practice Deconstruction is to seek compromise from the start. In fact, even for the goal of arriving at what we see as the truth, this is a more pragmatic approach. When a debate becomes hostile and positional, we become blind to reason. We muddy the water so much that we cannot see what’s at the bottom. By seeking to compromise, we keep the water clear, leaving the possibility that the other would see the truth by our feet.

In our postmodern world, most of us are smart enough to understand the theoretical benefits of Deconstruction. Now it is time we put the theory into practice.