What We Can Learn About Startup from Lighting a Campfire

Many startups have this strategy: “Let’s get as many users as possible, and worry about monetizing later.” And, some startups have the opposite problem where their monetization strategy is sound but cannot build enough user traction. I use an analogy of building a campfire to describe these problems. Square, for instance, was able to build user traction very quickly because their card reader was revolutionary. They struck the fire-starter rod once, and the tinder (shaved pieces of wood or pieces of paper) caught on fire immediately. It started spreading quickly to the kindling (small pieces of wood, twigs, or branches), but they had no fuel wood (large blocks of wood). It looks like they didn’t even think about where to get the fuel wood from when they launched the company. Other financial firms like Chase and Citibank have introduced their own mobile card readers. They have plenty of fuel wood as traditional banks. Now Square’s kindling is burning out, and their flames are getting smaller. If they don’t find the fuel wood soon, their campfire will go out completely. 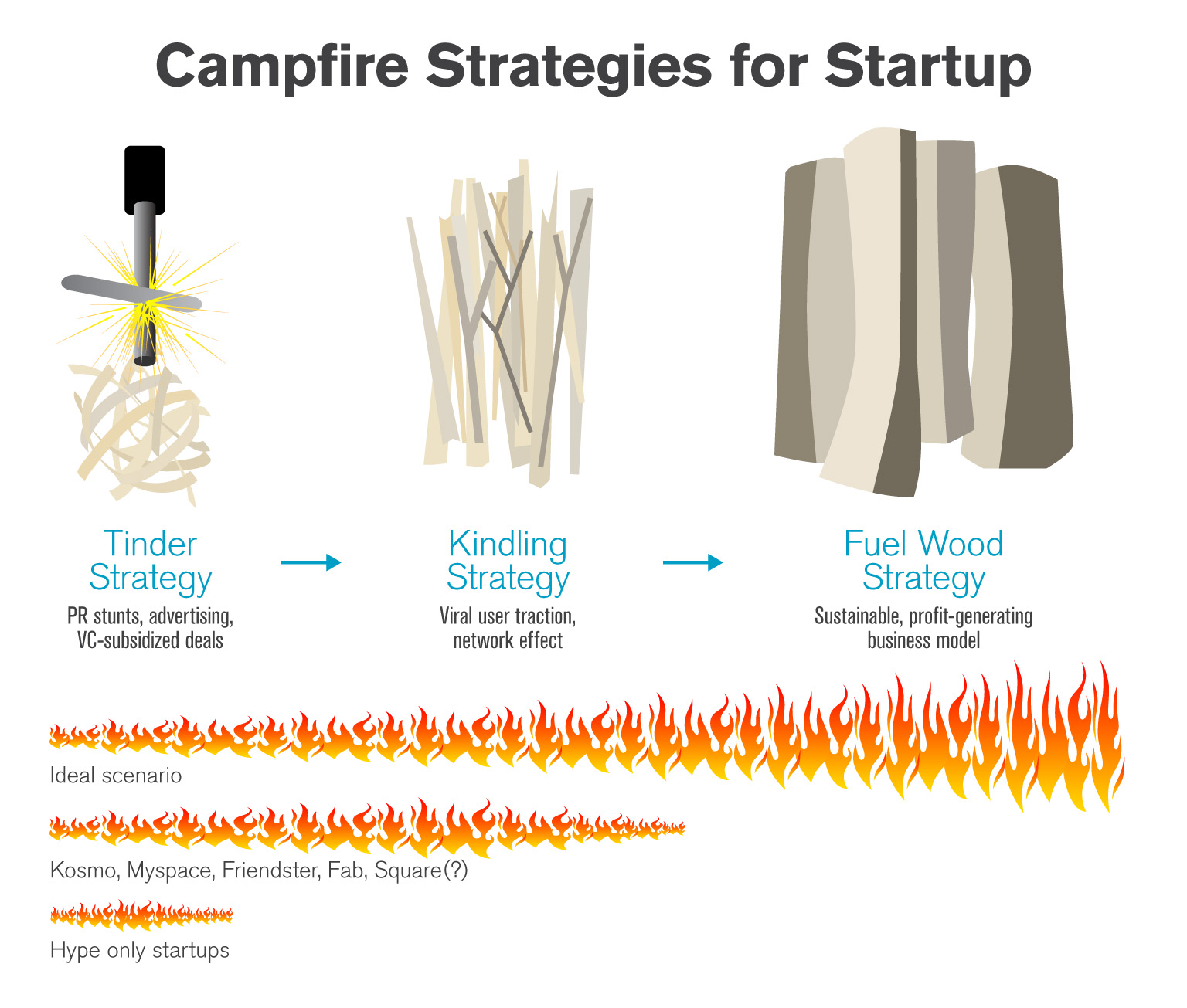 My own site, AllLookSame.com, went viral a week after it launched in 2001, and amassed 2 million users since then. But I had no plan to monetize the site, as it was mostly a joke, so I couldn’t think of a way to monetize it after the fact. The fuel wood was entirely missing.

A more interesting case to consider is the opposite one where the startup has a solid business plan/model for getting the fuel wood, but have no kindling. It’s easy enough for most startups to light up the tinder, especially if they have investor money. A clever PR stunt, appealing to friends and families, advertising, and mass-emailing could light up the tinder, but if they are missing the kindling, tinder would not be able to burn long enough to heat up the large blocks of wood to a burning temperature. Some startups had a viable business model, but couldn’t bridge the gap between tinder and fuel wood. They ran out of money and died.

Not having the kindling in place is a problem because the tinder burns very quickly. (Not having fuel wood is fine as long as you have a viable plan for getting it later.) If the kindling is not already in place when you light up the tinder, the tinder will simply burn out. You would just waste the tinder and your effort to light it up. You have to go find more tinder again, and try lighting it.

Your kindling has to have some viral factor to grow beyond the people who were directly triggered by you. And, for the kindling to have a viral factor, it needs to have low friction. If it costs a lot of money to try it for the first time, it wouldn’t go viral (unless the proposition is exceptionally compelling). Most people would be willing to try something new if the price is less than $10. Even if it turns out to be bad, $10 is all they would lose. Convincing someone to try something that costs $100 or more, on the other hand, is no easy feat. Many startups lose money in their initial transactions in order to lower the price sufficiently, or to make it completely free for the first-time customers. VC-backed startups can afford to do this for a while to build traction.

Dropbox offering more storage for referring friends was a kindling strategy. Without that, their tinder would probably have burnt out. And, they also had a fuel wood strategy in place from the start (to charge heavy users).

In my view, it’s miraculous that Airbnb succeeded. Not only that the price of trying Airbnb for the first time is high, but the anxiety level is high too (the idea of sleeping over in a complete stranger’s home). I’ve heard that many well-known investors turned them down even though they had a chance to invest early on. In my analogy, they actually succeeded in going from tinder to fuel wood without a kindling strategy, but it took two years for the fuel wood to start burning. It’s as if the three co-founders kept lighting matches for two years under the fuel wood. eBay is also a two-sided marketplace like Airbnb but there were plenty of low priced items on eBay, which made it easy for people to try without risking much money (or their own safety).

LinkedIn was a case where the kindling strategy appeared to be missing but existed. Social networks have very little value to the users until a critical mass is reached. A social network for business is particularly problematic because people wouldn’t post silly, casual things like they do on Facebook. So, how did LinkedIn go from tinder to fuel wood? I think my own experience with LinkedIn is typical. When it first launched, I was curious enough to try it and set up my profile on it, but after that, I didn’t touch it for like 5 years. Well, if you think about it, that’s good enough. Unlike the content on Facebook, resumes don’t need to change so often. Even a five-year-old resume is still useful. So, all that LinkedIn had to do was to get everyone to set up their profile once. They didn’t need the users to constantly use the site. Their kindling strategy was there from the start; it just wasn’t so obvious.

For my own startup, we are currently in the process of setting up all three strategies before we light the tinder. We built the fuel wood first, and are now building the kindling. When setting up a campfire, this is exactly what I do also. I have all three materials ready to go before I light it. When it works out as planned, it feels really good, but in most cases, there are some surprises. That’s part of the fun of lighting a campfire.