Recently there has been a lot of talk about “skills gap”. Although there are 4 million unfilled jobs, 11 million people remain unemployed in the US. The most common solution suggested by many, including President Obama, is to attract more people to “STEM” fields (science, technology, engineering, and math). I believe this is misguided, or too short-sighted. By the time our kids in high school graduate from college, STEM fields may already be crowded. The key to closing the skills gap isn’t to choose a field with higher demand, but to increase the speed at which we learn any skills. The main problem in skills gap is that the world is evolving much faster than we can learn. The “half-life” of any professional skill is becoming increasingly shorter. To thrive in today’s technological society, we have to be able to learn fast, and on our own.

To illustrate this, let’s look at the popular Bell curve of “Innovation Adoption Lifecycle”. 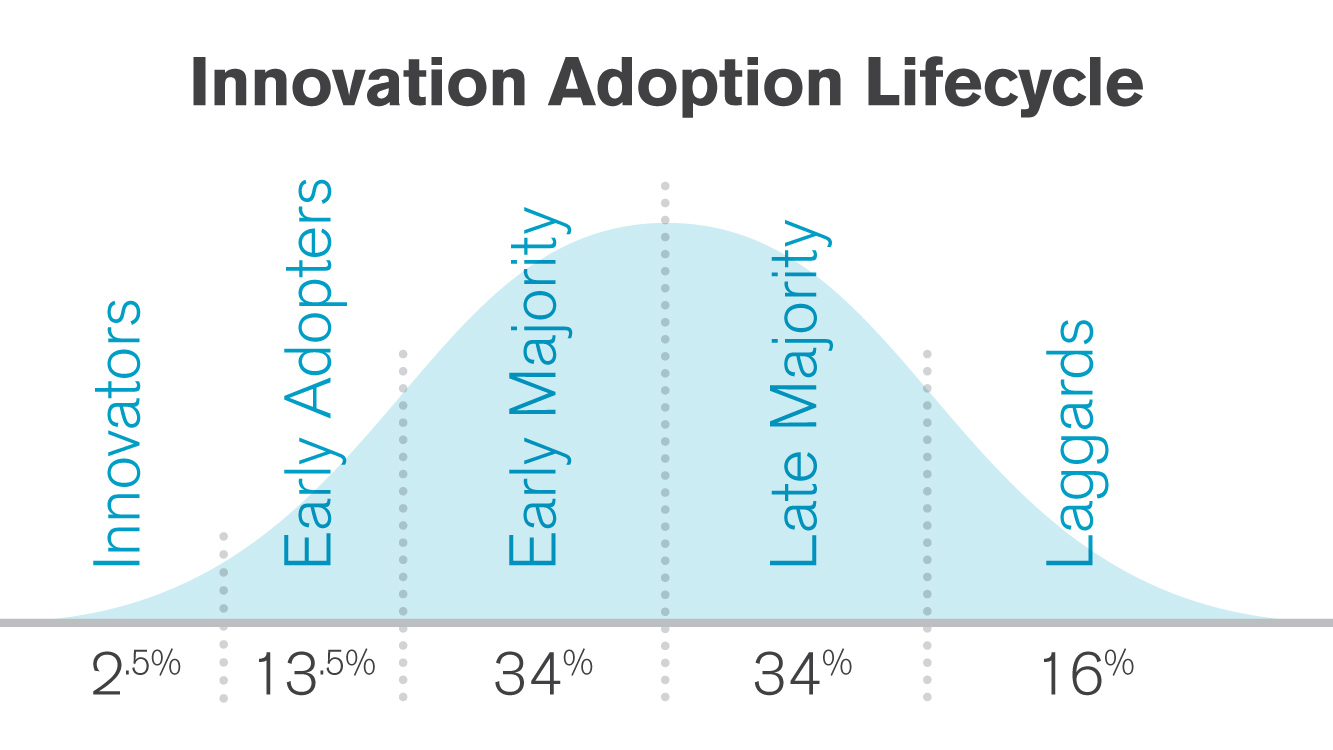 The numbers at the bottom indicate what percentage of people belongs to each segment. The horizontal line also implies time; how innovation is adopted by the entire population over time, “the diffusion process”. (See Wikipedia for more ») Let’s think about how skills necessary to use these innovations shift across the timeline. 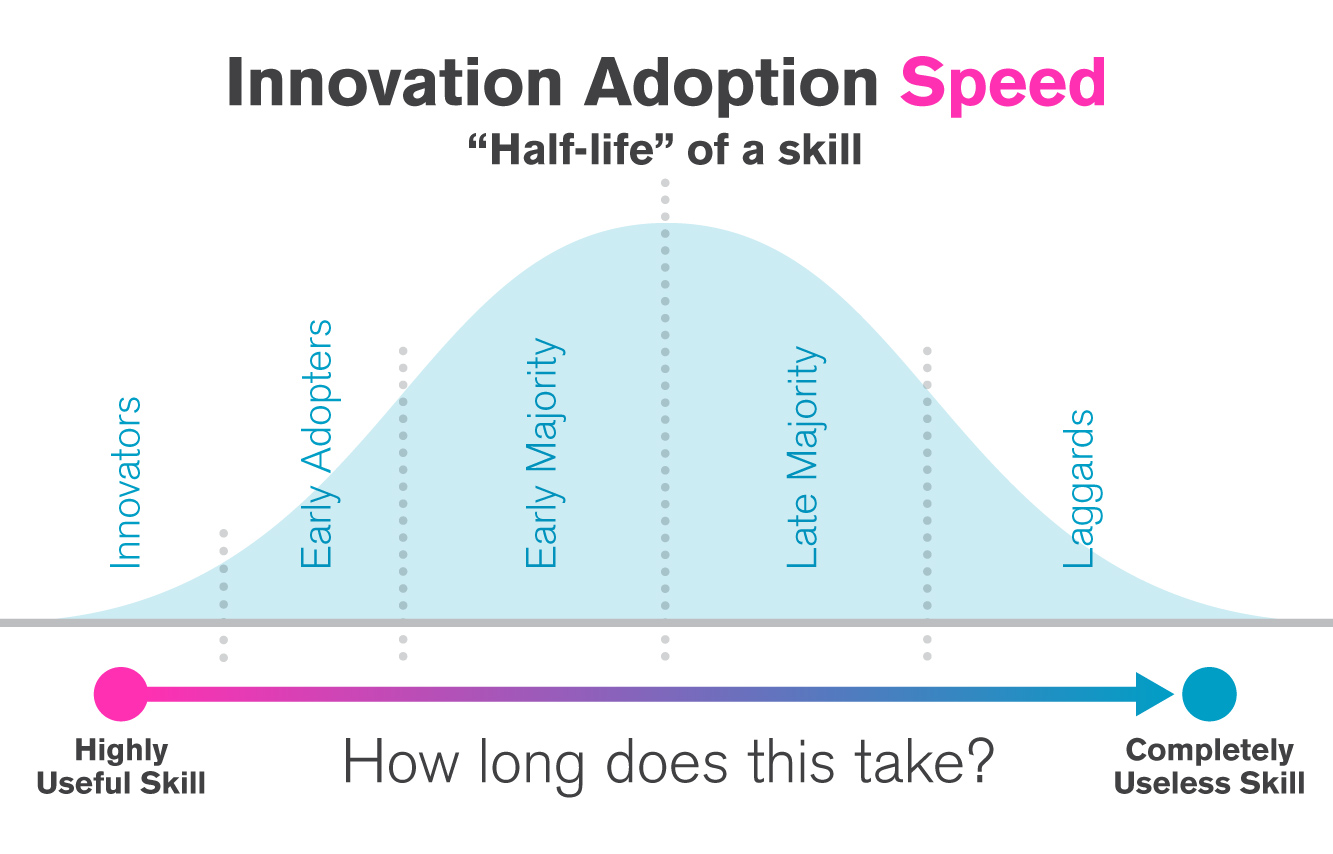 Innovators innovate something revolutionary that changes the way we live or do business (more efficient, faster, higher quality, etc..), which creates new demand for people who have the skills to use the innovation. These skills are highly useful and valuable at first but as time passes and as more people learn the same skills, they shift towards the right. And, some years later, they reach the “Laggards”. At that point, those skills are useless because new innovations would replace the now-old innovation. The question we should ask is how long does this process take? (What is the time it takes for any skill to lose half of its value?) Naturally, this would be different for different fields. Some are more time-sensitive than others. What we call “skills gap” is essentially the difference between the time it takes any skill to lose its market value and the time it takes an average American to learn a new skill. “Skills gap” is not about the gap between the fields with high demands and the fields where the workers are. So, how can we increase the speed of our learning? 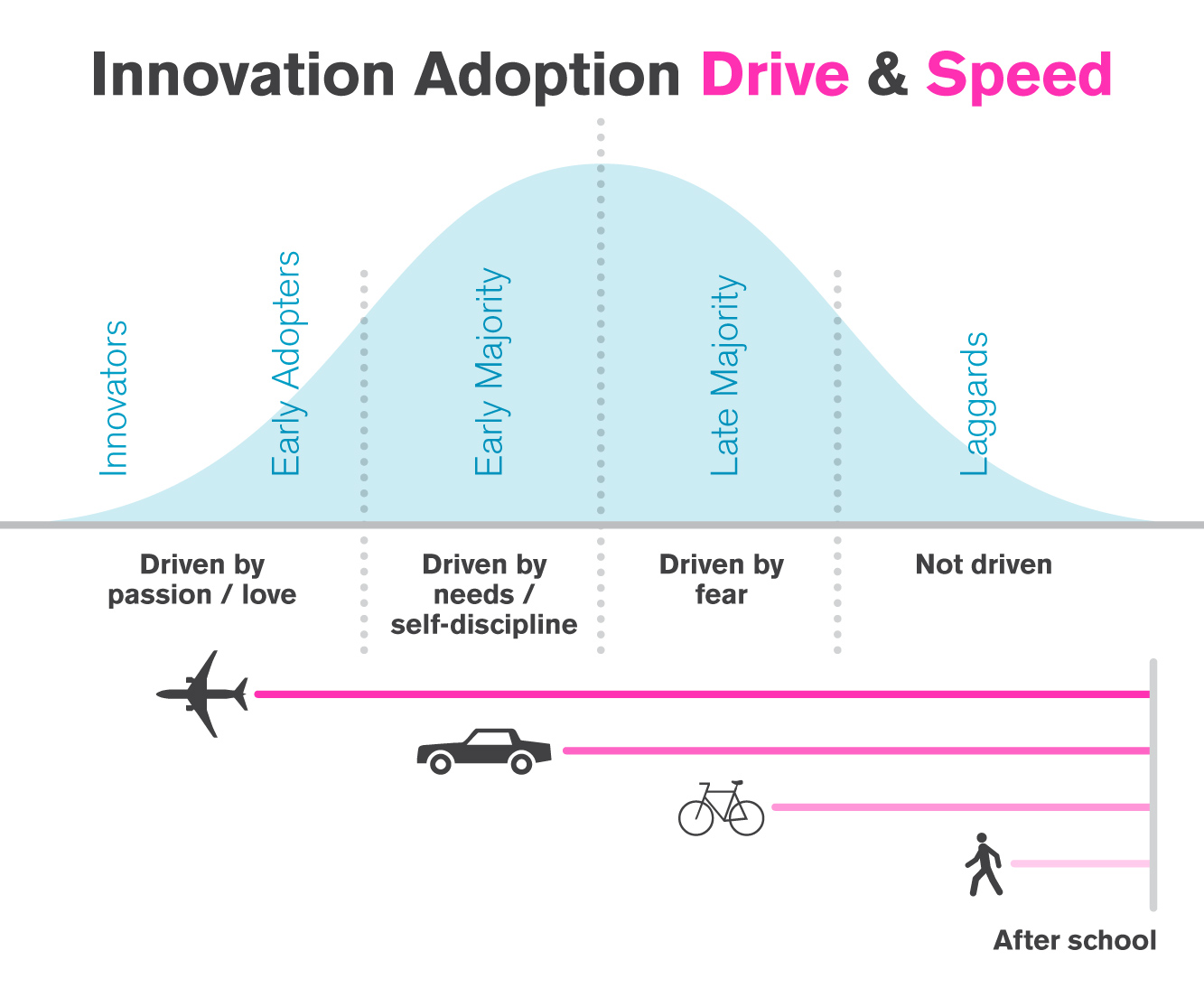 After finishing our basic education, we go out into the real world and learn real skills. At first, we are behind the curve, and we have a lot to catch up with. We need to move towards the left as quickly as we can. If you are fast enough, you would reach a point where you’d learned everything you could learn from other people. You would be on your own. You would have to innovate at that point.

At each segment, a different method of learning becomes necessary. Below is a list of those methods. 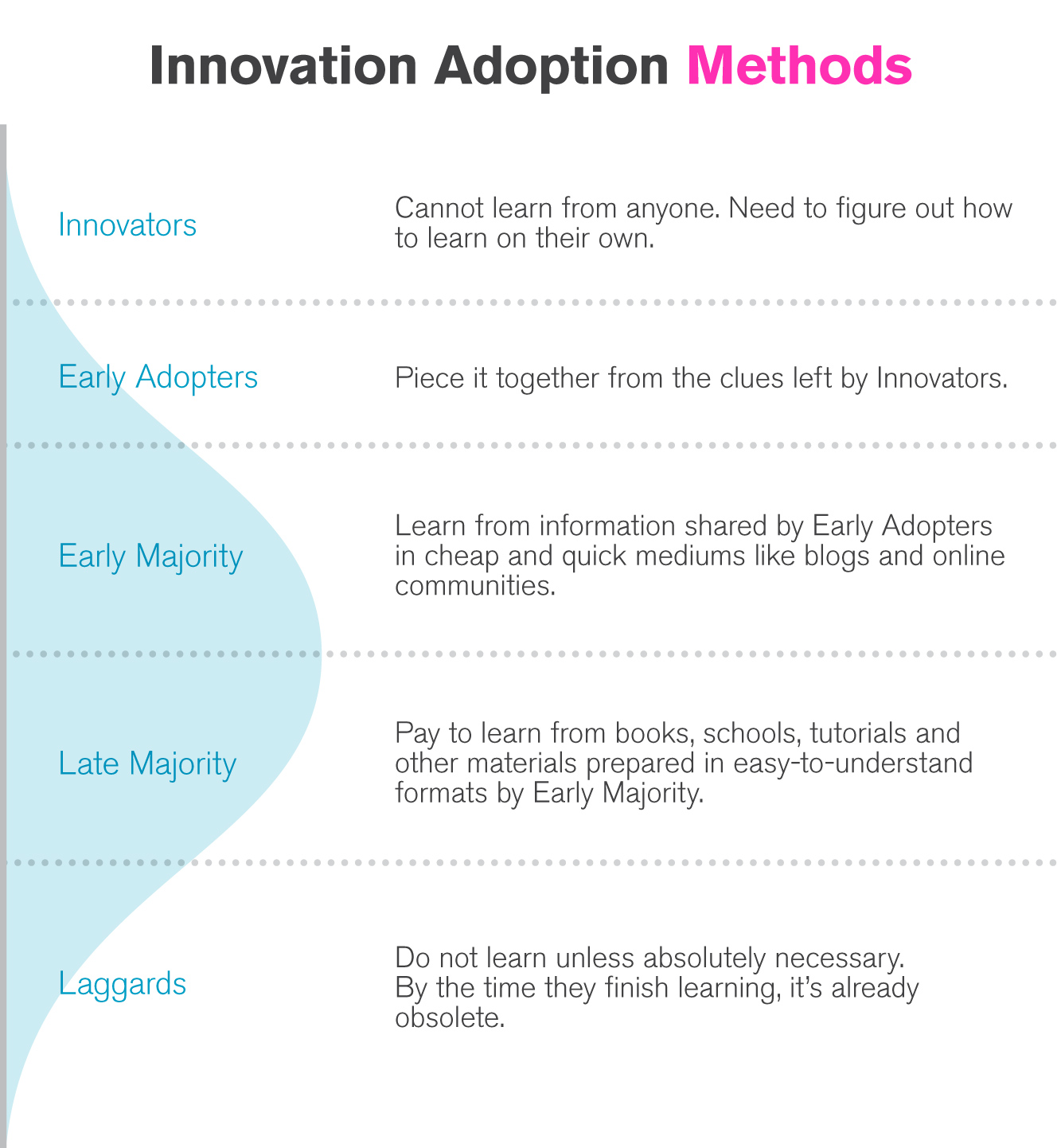 Innovators cannot learn from anyone because they are trying to solve problems that have never been solved by anyone. They have to pave their own way. How to learn something on our own is not something we can learn in school (it would be an oxymoron).

Early Adopters learn from Innovators but the learning materials haven’t been prepared formally by anyone. Most innovators have no time to be writing tutorials, books, or teaching classes. Early Adopters have to be very good at finding and putting together pieces of puzzle that are scattered all over the place.

Early Majority learn by reading materials informally shared on websites and online discussion forums by Early Adopters. These mediums are easy to use and cheap, so Early Adopters are willing to contribute but they would not go as far as to make it easy for anyone to understand.

Late Majority learn from tutorials, books, and classes. It takes a significant amount of time, energy, and money to prepare these learning materials that can be consumed by a wide range of audience, so it wouldn’t make sense to create them until the dust of innovation has settled and “best practices” have been established.

Laggards are the last holdouts. They do not want to learn unless it becomes absolutely necessary. And, by the time they learn anything, that particular skill would already be obsolete.

How do we learn how to learn on our own? Actually we’ve all known this as babies. As infants, we were largely on our own since we had no language to transfer knowledge. We explored and figured things out on our own. At some point in our childhood, the societal pressure to learn became greater than our own desire to learn, at least for most people. This is when we began losing our ability to learn on our own. The adults around us started pressuring us to learn so many things that we no longer had time to learn things we felt curious or passionate about. Eventually we gave up and just let the grownups tell us what and how we should learn. This is when self-discipline became more important.

When you search the Web for how to learn skills quickly, you find everyone talking about how to manage our own self-discipline. By following their advice, you could reach Early Majority but it would be difficult to go beyond it because the top 16% is filled with people who don’t need self-discipline; because they love what they do. This difference can be seen between Japan and the US. 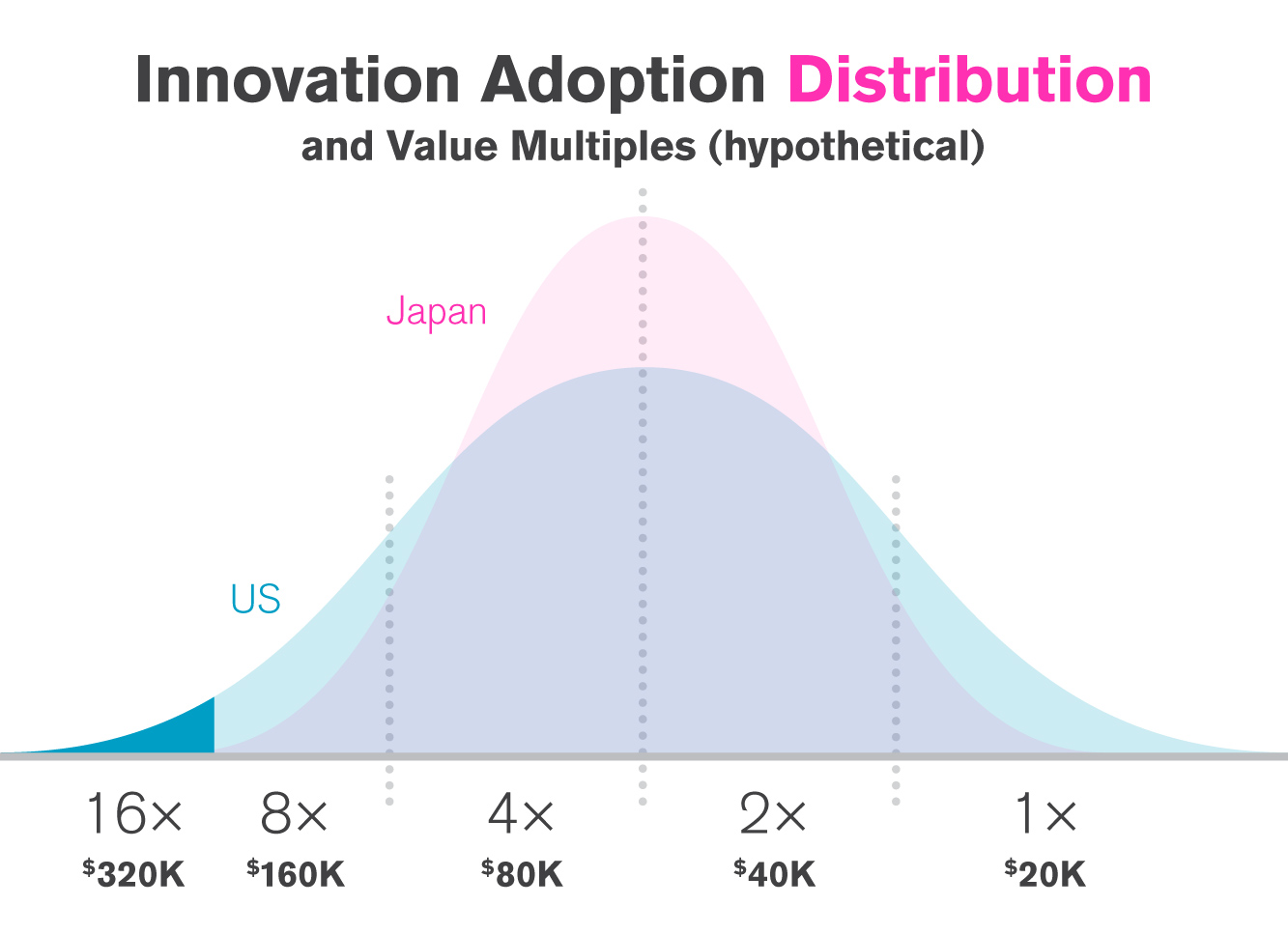 The Japanese culture is more conformist than the US. Because of this, more people are concentrated at the center of the Bell curve in Japan. At the right end of the curve, literacy is almost 100% in Japan while 14% of Americans are illiterate (and hasn’t changed in a decade). But at the other end, the US has more exceptionally skilled, creative, and/or talented people, and economically this matters a lot because the value (or productivity) across the curve does not increase linearly but exponentially. Especially today with powerful search engines, everyone can find the best and the cheapest of anything in the whole world. The best is many times more valuable than the second best. This is partly why the top “1 percent” gets everything; because we all flock to them.

So, what is the solution for “skills gap”? To increase the speed of learning. How do we do that? By finding our passion. How do we find it? If you’ve already lost it, and can’t find it, managing your self-discipline would be your second best solution (as many people advise on the Web). But for our children, I think the best solution is to keep their own passions alive; not overwhelm (and eventually extinguish) their passions by pressuring them to perform well academically. It’s like protecting the flame from the wind when starting a campfire until it is strong enough that it no longer needs your care or protection.