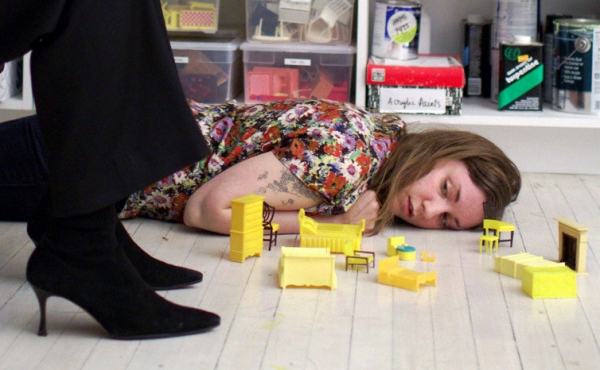 I’ve been hearing a lot about Lena Dunham recently but I hadn’t seen any of her work before. I watched Tiny Furniture on Netflix this weekend. What makes this film immediately unique is that the main character is authentically unattractive. She is not ugly but just unattractive and ordinary. Most movies are about human struggles but it’s almost always beautiful people who are struggling over money, love, illness, crimes, injustice, conflicts, wars, careers, friendship, disasters, etc.. Since lead characters have to always be beautiful, movies rarely deal with struggles that arise from being unattractive. Tiny Furniture deals with a topic that concerns many people but is rarely dealt with in films.

But it goes beyond just the choice of topic; the execution is almost impeccable. Dunham’s portrayal of herself is so honest that it’s painful to watch. In most films that have unattractive lead characters, the ultimate message is “everyone can be beautiful”. We see the characters transform themselves on screen. They are essentially revenge stories with happy endings. This was Barbra Streisand’s speciality. They are critical of those who judge others for their looks but they too in the end cannot escape their attachments to their own looks, and end up using the same weapon to fight it. And, many of these films feature actors who are actually quite attractive, but we are supposed to believe that they are unattractive. In Tiny Furniture, Dunham faces the reality head on, and does not pretend to offer a neat solution. It just studies life and reality as they are without judgment.

Another common pattern we see in films with unattractive lead characters is that they go overboard. Female comedians do this often. They go out of their ways to make themselves look ugly. This too is still a defense mechanism. They are unable to present themselves honestly on screen, because honesty (especially when you are unattractive) is painful. Most of us simply cannot present our own vulnerability without somehow distorting it; either by hiding it or by exaggerating it. Revealing our own vulnerability honestly takes an enormous amount of courage. And, Lena Dunham does not even hide behind a fictional character.

Another predictable trap that she avoids is to make a moral issue out of it. Most films that depict the struggles of unattractive people make moral points. There are clear villains in the films that we point our fingers at. In Tiny Furniture, Dunham is not judgmental. She does not process her emotions by pointing her fingers at villains. She depicts them as normal humans who are just trying to do their best given their own predicaments. It’s not that she wants us to feel sorry for her; she just wants to share how life looks from her perspective. Because we are all so preoccupied with our own lives and problems, we often fail to see life from the perspectives of others, and Dunham let us see what she sees, without distorting it. I’m not sure how she was able to avoid the temptation to distort it. Given how young she is, it is an amazing feat.

I even love the cinematography of this film. She didn’t attempt to aestheticize the photography nor deliberately do away with cinematic lighting in an attempt to be more “real”. It’s perfectly neutral, and this neutrality is quite brutal to her face and body in some of the scenes, but again, they are not exaggerated either.

Tiny Furniture is a demonstration of Dunham’s raw talent; what she can do with very little, not just in terms of budget but in terms of life experience. She shows us that we don’t have to travel around the world to write a great story; if we have the talent, insight, and courage, we all could write great stories out of our mundane lives. I felt inspired and ashamed at the same time from watching it.