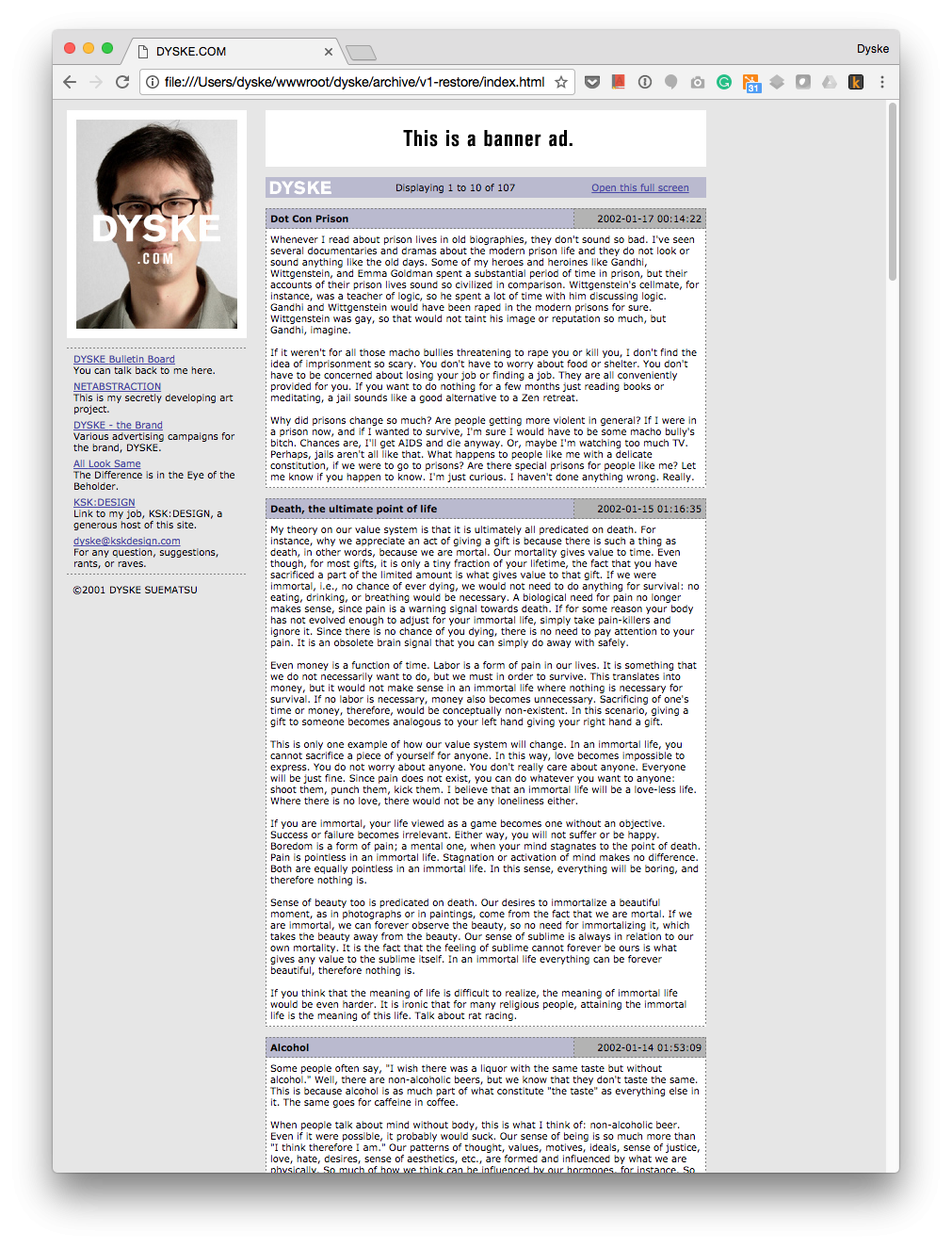 This site was originally launched in the summer of 2000 when the word “blog” was not commonly known. (In fact it was called “web log” then.) There was no WordPress or any blogging apps. It was hand-coded using Perl script and was hosted on a computer that was in the design studio I used to work for. I figured out how to direct the outside traffic into that machine. The idea of dynamically updating the content of a website by filling out the form on the very site was rather new. In fact, I didn’t know if anyone else was doing such a thing at the time since it was not trivial to connect a website to a database.

Believe it or not, I was quite scared and worried at the time about sharing my thoughts online. I didn’t know what would happen. It’s almost like posting a naked photo of yourself online. How would the world react? What if future employers or clients saw what I wrote? How would they react? I didn’t even know how many people would come to my site. It was all unknown then.

The idea that it was technically possible for anyone in the world to access this little computer in the office made it feel like I’m exposing myself to millions of people. Some people who are not used to sharing anything online publicly still feel the same way, even though in reality very few people actually do especially now with so much content on the Internet. And, even those who come read it don’t ultimately make much of it no matter how controversial you try to be. The bottom line is that you always make a bigger deal of yourself than other people do. After all, they don’t care about you as much as you do.

This site has been redesigned and re-coded six times in the past. The latest you are seeing here has been redesigned to cater to the common behavior of the current web users. They no longer visit any websites on a regular basis. The entry points to the information on the Internet are now social media (i.e. Facebook), search engine (i.e. Google), email, and instant messaging (like SMS, Snapchat, Slack). People who enter this site from the home page is a small minority (approximately 5%). They land directly on the individual articles from those entry points, and as soon as they get what they were looking for, they leave. So, there is no need for navigation bar. And, if they do care to browse the content, they just need to see the headlines. Why make them click through many pages of them? So, I just listed them all in one paragraph. The entire content of the site is on one page. There is no branding because people do not care about brand value of content on the web. They routinely share articles hosted on sites they’ve never heard of before as long as they find them interesting. They don’t care about TV networks; they care about the individual shows. They don’t care about “albums”; they care about individual songs. They don’t care about publishers; they care about individual articles. So, here it is; no branding. Since this site has no commercial motivation, all it does is to serve the content.

I hope you enjoy it.